Our story so far: In Thursday’s debate, Fox host Megyn Kelly asked Donald Trump why he was so fond of insulting women. Trump answered that he had just been kidding around. “I don’t frankly have time for total 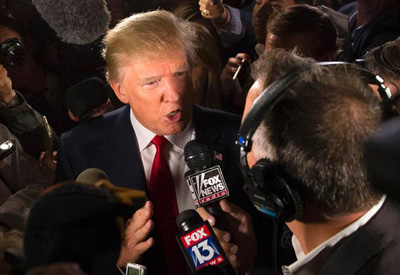 political correctness,” he said. “And to be honest with you, this country doesn’t have time either.”

That didn’t go over too well, but Trump seemed like he’d probably survive it. Unfortunately, Trump being Trump, he couldn’t leave bad enough alone. In the spin room after the debate he started attacking Kelly and boo-hooing about how she had treated him worse than the other candidates. Then, showing the restraint he’s famous for, he followed this up with a series of increasingly unhinged tweets about Kelly throughout the night and into the early morning. Finally, during a CNN interview on Friday night, he said this:

Let’s call it Wherevergate. This was a pretty obvious allusion to Kelly being unable to control her anger because she was having her period. Then things got weird.

(That’s right. Things weren’t really weird yet. So far this is all pretty normal in Trumpland.)

Anyway, Erick Erickson—tea party activist extraordinaire and founder of the influential RedState blog—got wind of Trump’s “wherever” comment and decided he was unhappy about it. Now, this is weird, because Erickson is not exactly famous for either his restraint or his sympathy for women’s tender feelings. He once called retiring Supreme Court justice David Souter a “goat fucking child molester”; called Michelle Obama a “Marxist harpy wife”; and lashed out at feminists during the 2008 campaign by calling a statement from the New York chapter of NOW the “latest salvo fired from the thighs of ugly nags.”

In other words, Erickson is not the shy and retiring type. But he eventually apologized for those comments and apparently decided to turn over a new leaf. “I’ve definitely had to grow up over time,” he told Howard Kurtz in 2010. So when he heard Trump’s remark about Kelly, he decided enough was enough. If he was going to grow up, then by God, everyone had to grow up. Trump hadn’t, so Erickson called up Trump’s campaign manager late on Friday and disinvited Trump from this weekend’s big RedState shindig in Atlanta. “I think there is a line 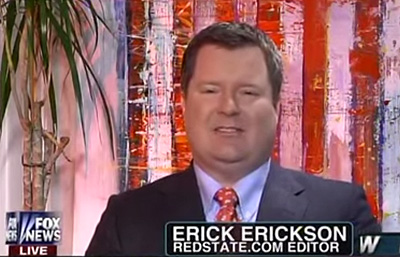 of decency that even a non-professional politician can cross,” he told the Washington Post. “Suggesting that a female journalist asking you a hostile question is hormone related, I think, is one of those lines.”

Needless to say, The Donald didn’t take this lying down. Erickson’s decision, he said, was “another example of weakness through being politically correct….Blame Erick Erickson, your weak and pathetic leader.” Was that enough? Of course not. “Not only is Erick a total loser,” he said in a statement released Saturday, “he has a history of supporting establishment losers in failed campaigns so it is an honor to be disinvited from his event.”

Oh, and his “wherever” comment? Trump said he was referring to Kelly’s nose. “Only a deviant would think anything else.”

Roger that. So far, Erickson’s acolytes are apparently divided about the whole thing. Some are glad to see Trump’s back, others think Erickson has fallen into the pit of lefty political correctness. Stay tuned for more.

In any case, after all the inflammatory stuff Trump has said over the past couple of months, this appears to be the comment that’s finally going to cause him some real trouble. Go figure. Carly Fiorina immediately tweeted, “Mr Trump: There. Is. No. Excuse.” Lindsey Graham criticized Trump too, while other Republican candidates were more circumspect. So far, anyway. But I suspect this will turn into a feeding frenzy before long. Republicans are still spooked about the whole War on Women thing, and they’re none too happy about Trump taking on a Fox News host either. I think we can expect the Sunday talk shows this week to be all Trump all the time.

So that’s that, though I’m sure this post will be out of date almost as soon as I publish it. I just thought you’d all like to know what had happened while you were snoozing away the weekend.