The owner of the Milwaukee Bucks wants a new stadium. But he doesn’t want to pay for it himself. So he’s threatened to move the Bucks to a new city if Wisconsin doesn’t pony up $250 million to help finance the shiny new sports palace he wants.

Unfortunately for him, Wisconsin’s governor is Scott Walker, a small-government Republican who’s famous for being a fighter. He won’t give into extortion like this. If the Bucks need a new stadium, they can jolly well —

Oh wait. It turns out that Walker caved in pretty easily and the Bucks got their bucks. Paul Waldman is properly dismayed:

One might have expected more from a politician who is basing his presidential campaign on his eagerness to “fight.” This combativeness is central to Walker’s 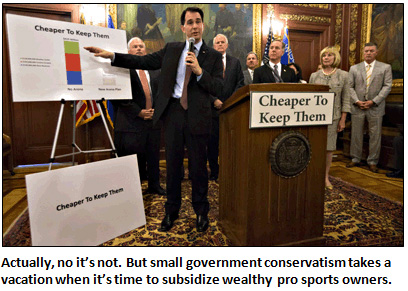 appeal — but it turns out that he’s only interested in fighting people like union members. Extortionist plutocrats, not so much.

….Even more fundamentally, one has to ask why “small government” conservatives — as Walker and every other Republican candidate considers himself — think that government should be in the business of building stadiums. Don’t they believe in the power and wisdom of the market? If the shrewd businessmen who own the Bucks would increase their profits by building themselves a new stadium, then they’ll do it. If it wouldn’t increase their profits, then they won’t, and the market will have spoken.

For some reason, professional sports franchises float serenely above the free market for both Democrats and Republicans. Neither party has been especially impressive on this score. Still, it’s Republicans who are the market purists. They’re the ones who insist, for example, that providing health care for 15 million people is a travesty if the government is involved in subsidizing it. But basketball? Go Bucks! That seems like a screwed up set of values to me, but I guess I just don’t understand economics as well as Scott Walker.