Jeb Bush wants us all to chill out about his use of the term “anchor babies”:

What I was talking about was the specific case of fraud being committed. Frankly it’s more related to Asian people coming into our country, having 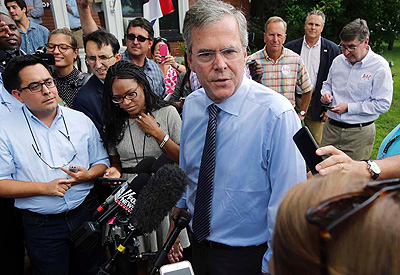 children, and….taking advantage of a noble concept, which is birthright citizenship.

Um….no. Bush initially used the term in a radio interview with Bill Bennett. The conversation was entirely about Donald Trump’s immigration plan, securing our southern border, and dealing with our third-largest trading partner. In other words, it was all about Mexico. Bush was very definitely not talking about Asians.

And if he was, there’s already a perfectly good term to use: birth tourism. It’s well known, well documented, and clearly a growing phenomenon. There’s no need to describe it using a term that many people find offensive, since there’s already one available.

Basically, Bush is tap dancing here. But he’s also doing us a favor. In my tedious discussion of “anchor babies” on Saturday, I concluded that its offensiveness depended on whether it was an actual problem in the first place. Bush is pretty much conceding that it’s not—at least as it refers to illegal immigration from Mexico. But if it’s rare or nonexistent, then you’re imputing offensive behavior to immigrant mothers for something they don’t do. And that does indeed make it offensive.