Among married people between the ages of 20 and 60, 67 percent of Republicans report being “very happy” with their marriages….That gap shrank when the researchers factored in demographic differences between parties….But the gap did not disappear. Even among people with the same demographic profile, Republicans are slightly more likely than Democrats to say they are happily married. The seven-percentage-point 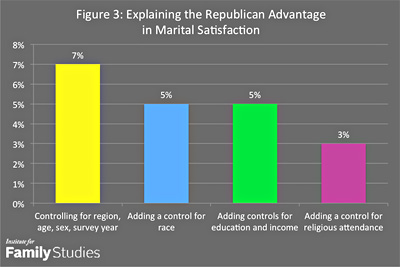 gap that exists between Republicans and Democrats without any demographic controls shrinks to three percentage points with those controls.

OK, so three percentage points. And since this study was done by Brad Wilcox of the right-wing Institute for Family Studies, you have to figure it’s as friendly toward Republicans as possible. But even Wilcox admits that causality might work in the opposite direction:

Sure. The Democratic Party is obviously more friendly toward non-married couples and the Republican Party is more dedicated to the proposition that (heterosexual) marriage is important. So the survey difference could be due to the fact that Republicans are simply less likely to admit to an unhappy marriage. As Wilcox says, “Perhaps Republicans are more optimistic, more charitable, or more inclined to look at their marriages through rose-colored glasses.”

Personally, I’d be happy to put this whole subject to rest. The differences are small no matter how you slice the data, and really, who cares? Republicans generally report higher happiness levels overall, which is understandable at one level (conservatism doesn’t challenge your comfort level much) but peculiar at another (if they’re so happy, what’s the deal with the endless anger and outrage?). But whatever the reason, if they’re generally happier they’re probably also happier with their marriages.

As for generally dysfunctional family behavior (teen pregnancy, divorce rates, etc.), I suspect that has a lot more to do with social factors like race, age, religion, and so forth. Party ID doesn’t seem likely to play a huge role as a causal factor. Unless someone comes up with some genuinely blockbuster results, I’m willing to just call this a tie and move on.