A new NBC poll has gotten a lot of attention today for suggesting that Donald Trump won the Republican debate on Thursday. And maybe he did! But I’d take the results with a 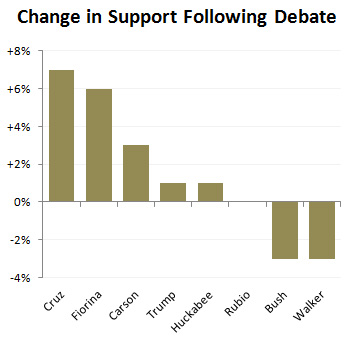 grain of salt. Here’s why:

I’m not foolish enough to predict what’s going to happen to Trump’s poll numbers over the next week. I feel safe saying that Trump will implode eventually, and that he’ll implode over something like this weekend’s lunacy. But whether it will happen over this weekend’s version of this weekend’s lunacy—well, who knows? The base of the Republican Party is pretty inscrutable to a mushy mainstream liberal like me. I’m really not sure what will and won’t set them off these days.

As for the rest of the results, I’m stumped over Ted Cruz’s gain. He didn’t seem to especially stand out on Thursday. Conversely, Fiorina is easy to understand, and Carson’s bump might just be due to increased name recognition. Bush and Walker dropped a little more than I would have guessed, but 3 percent still isn’t much. We’ll see if all these results hold up over the next week.