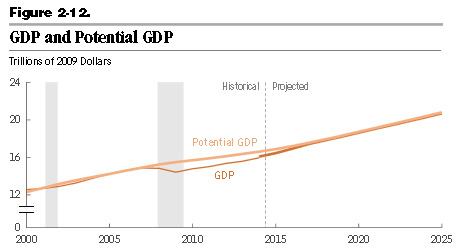 Here’s something that ought to be good news: according to the CBO, the output gap—the difference between actual GDP and potential GDP—should disappear by the end of 2017. This depends on the recovery continuing, of course, but still. It’s nice to see that the economy will probably be running at full steam within a couple of years.

Except that the news isn’t so rosy once you understand why the CBO thinks the output gap will shrink to zero. It’s not because GDP growth is great. It’s because potential GDP growth is kind of sucky:

CBO projects that real potential output over the 2020–2025 period will grow by 2.1 percent per year, on average. That figure is substantially lower than the agency’s estimate of the rate of growth that occurred during the business cycles from 1981 to 2007—3.1 percent per year, on average….According to CBO’s estimates, the recession and the ensuing slow recovery have weakened the factors that determine potential output (labor supply, capital services, and productivity) for an extended period.

….The main reason that potential output is projected to grow more slowly than it did in the earlier business cycles is that CBO expects growth in the potential labor force (the labor force adjusted for variations caused by the business cycle) to be much slower than it was earlier. Growth in the potential labor force will be held down by the ongoing retirement of the baby boomers; by a relatively stable labor force participation rate among working-age women, after sharp increases from the 1960s to the mid-1990s; and by federal tax and spending policies set in current law, which will reduce some people’s incentives to work.

CBO is basically buying into the secular stagnation theory here. The recession, along with demographic factors, has caused a permanent slowdown in the potential capacity of the US economy. Slow growth is the new normal.