New Snowden documents indicate that AT&T has been the biggest and most cooperative supplier of internet and phone data to the NSA:

AT&T has given the N.S.A. access, through several methods covered under different legal rules, to billions of emails as they have flowed across its domestic networks. It provided technical assistance in carrying out a secret court order permitting the wiretapping of all Internet communications at the United Nations headquarters, a customer of AT&T.

….In September 2003, according to the previously undisclosed N.S.A. documents, AT&T was the first partner to turn on a new collection capability that the N.S.A. said amounted to a “ ‘live’ presence on the global net.” In one of its first months of operation, the Fairview program forwarded to the agency 400 billion Internet metadata records — which include who contacted whom and other details, but not what they said — and was “forwarding more than one million emails a day to the keyword selection system” at the agency’s headquarters in Fort Meade, Md.

….In 2011, AT&T began handing over 1.1 billion domestic cellphone calling records a day to the N.S.A. after “a push to get this flow operational prior to the 10th anniversary of 9/11,” according to an internal agency newsletter. This revelation is striking because after Mr. Snowden disclosed the program of collecting the records of Americans’ phone calls, intelligence officials told reporters that, for technical reasons, it consisted mostly of landline phone records.

US spying on the UN was stopped in 2013 after it was first reported, but it was never clear just exactly how much spying had gone on in the first place. We still don’t know, but one of the documents in this new collection says the NSA was authorized to conduct “full-take access,” and that the amount of data was so large that it flooded the NSA’s technical capability unless a “robust filtering mechanism” was put in place. Sounds like a lot of spying. 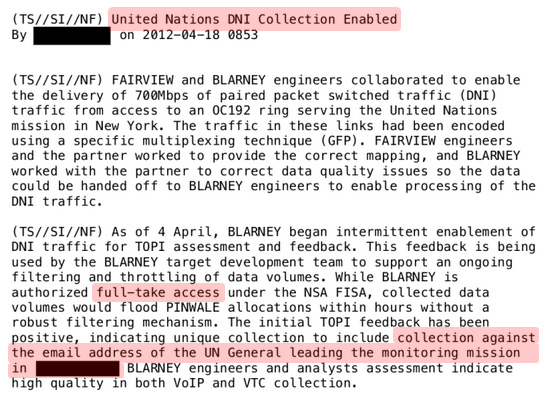