Good news! The Senate has come up with a compromise 6-year highway funding bill. It’s 1,030 pages long, so no one really knows what’s in it, and it only specifies funding sources for three years. But let’s not be 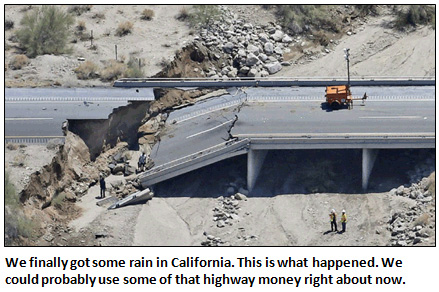 picky. It’s a bill. So where’s the money coming from?

Under the Senate agreement, Congress would raise $47.1 billion to cover three years’ worth of spending through a combination of spending cuts and tax increases. Lawmakers came up with $9 billion of the total by agreeing to sell 101 million barrels of oil from the nation’s emergency stockpile over a seven-year period through fiscal 2025. Another $16 billion would come from lowering to 1.5% from 6% the dividend paid to all but the smallest banks that are members of the Federal Reserve system.

Seriously? Tax increases? Mitch McConnell agreed to this? Maybe it’s in the $22 billion that’s mysteriously absent from the Wall Street Journal’s report. Let’s see if The Hill has more:

“The bill is fully offset with spending reductions or changes to federal programs,” [three Senate sponsors] said. “It does not increase the deficit or raise taxes.”

….The proposal calls for generating $16.3 billion from interest rate changes, $9 billion from sales of reserved oil, $4 billion from customs fees, $3.5 billion from the TSA fees and $1.9 billion from extending guarantees on mortgage-backed securities that had been scheduled to start declining in 2021. Other funding sources in the measure include approximately $7.7 billion in tax compliance measures.

Hmmm. I guess “fees” don’t count as taxes? And apparently neither do “tax compliance measures”—though I’ve certainly heard Republicans claim in the past that efforts to get rich people to actually pay their taxes were little more than a stealth tax increase.

Amusingly, the money from customs fees comes from indexing them for inflation. And that’s OK with Mitch McConnell. But indexing the gasoline tax to inflation? That’s a tax increase. Absolutely out of the question.

Anyway, the House has its own highway bill, which only runs for six months but would supposedly give them time to come up with a real, honest-to-goodness, fully-funded 6-year bill. That’s very optimistic, considering that Congress has been haggling over this for seven years now and has never been able to do more than pass a quick fix that kicks the can down the road for a few more months. And that might happen again. McConnell and the other sponsors of the Senate legislation want their bill voted on quickly and then approved by the House before the August recess, since that’s when the Highway Trust Fund literally goes broke. But plenty of senators aren’t on board yet, and House leaders are skeptical too. If we end up with yet another 90-day fix, don’t be too surprised.