Apparently this is Let’s Make a Deal week. First the Greeks, now the Iranians. The deal with Iran restricts their supply of uranium, cuts down the number of centrifuges they can run, forces them to account for past activity, and puts in place strict verification measures. So when does it take effect: Here’s the Washington Post: 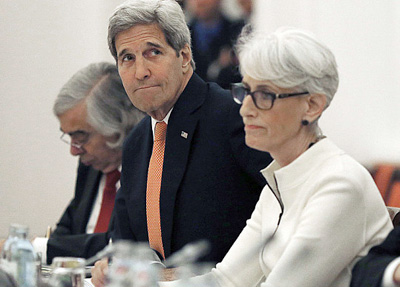 that Western diplomats have said could take at least until the end of the year.

Hmmm. That’s not necessarily a good start. So when will sanctions be lifted?

From the Post: A senior Obama administration official said that, until Iranian compliance is verified, an 18-month old interim agreement restricting Iran’s activities, and sanctions, will remain in place.

From the New York Times: Diplomats also came up with unusual procedure to “snap back” the sanctions against Iran if an eight-member panel determines that Tehran is violating the nuclear provisions.

The members of the panel are Britain, China, France, Germany, Russia, the United States, the European Union and Iran itself. A majority vote is required, meaning that Russia, China and Iran could not collectively block action. The investigation and referral process calls for a time schedule of 65 days, tight compared to the years the atomic energy agency has taken to pursue suspicious activity.

And here’s the Guardian with a bullet list of the main points of the agreement:

Overall, the deal seems to address most of the issues brought up by skeptics. Sanctions won’t be lifted right away. There’s an expedited process to reimpose them if Iran cheats. Military sites will be open to inspectors. Conventional weapons bans will continue for five years.

Benjamin Netanyahu is nevertheless apoplectic, of course, but who cares? He would be no matter what the deal looked like. At first glance, though, it looks reasonable. And since President Obama can—and will—veto any congressional attempt to disapprove the agreement, it will take a two-thirds vote to torpedo it. Presumably Obama can manage to scrape up at least a third of Congress to support it, so it should be pretty safe. That vote will take place in about two months.