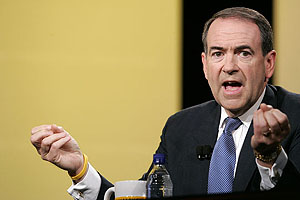 Here is what we have to do: America has to have the most formidable, fierce, military in the history of mankind. So when we have a threat, whether it is ISIS, Boko Haram, Al Qaeda, Hamas, Hezbollah, the Iranians, whatever it is, we make it very clear that we plan to push back and destroy that threat to us. And we won’t take 10 years doing it, we hopefully won’t even take 10 months, it will be like a 10 day exercise, because the fierceness of our forces would mean that we can absolutely guarantee the outcome of this film. That’s how America needs to operate in the world of foreign affairs, and foreign policy.

Damn! If only we’d known this before. If we had taken this stuff a little more seriously, we could have wiped out all these guys in a short series of ten-day bloodbaths. No more Al-Qaeda. No more ISIS. No more Hamas or Hezbollah. Even the entire country of Iran would apparently have fallen to our fierceness in ten days or so. Booyah!

Generally, speaking, I try not to obsess over each and every Idiocy of the Day™, since they fly fast and furious during campaign season. But I have to assume that Huckabee is being more than astonishingly ignorant here. He’s also channeling the beliefs of a lot of base conservatives, who figure if we stopped pussyfooting around and spending all our time worrying about PC crap like gay soldiers and whatnot, we could unleash the full might of America and destroy our enemies in a matter of days or weeks. And that would be that.

I wonder how many people are out there who believe this? More than we think, probably. Maybe someone should take a poll.