From Jeb Bush, asked about his economic plans:

My aspiration for the country and I believe we can achieve it, is 4 percent growth as far as the eye can see. Which means we have to be a lot more productive, workforce participation has to rise from its all-time modern lows. It means that people need to work longer 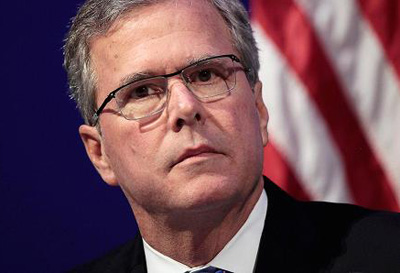 hours and, through their productivity, gain more income for their families.

Lots of people are mocking Bush for suggesting that Americans don’t work long enough hours. But aside from being tone-deaf, he didn’t really say anything wrong here. Economic growth is the product of hours worked and productivity growth, so he got that right. It’s true that Bush’s use of “productivity” in the third sentence is a bit confusing because he’s suddenly using it in its generic sense, not its formal economic sense, but that’s no more than the slight clumsiness that’s inevitable in live settings.

In any case, an aide later explained that when Bush talked about longer hours, he was referring to the underemployed and part-time workers, not suggesting that Americans in general needed to work more weekends. That’s fine. No one has a problem with that. The real issue here is different: Bush is once again merely stating economic platitudes. He wants 4 percent growth. Of course he does. Everyone wants that. He then repeats himself: he wants higher productivity and he wants the underemployed to work more hours. It’s like saying his goal is to lose weight, and then “explaining” that this means more exercise and fewer calories. No kidding. But what’s the plan for making it happen? That’s what we’re interested in.

I know, I know: lower taxes will supercharge the economy blah blah blah. Eventually he’ll have a 20-page white paper that’s about 19 pages of argle bargle and one page outlining his brilliant new tax plan. Wake me up if he ever says anything that goes beyond fantasyland.