Henry Chu of the LA Times reports on how the Greek media is presenting Sunday’s upcoming vote on the bailout:

Strong emotions are in abundant supply. But impartial reporting is not.

Along with Skai TV, nearly all the mainstream press and television stations in Greece have skewed their coverage or are openly in favor of the “yes” campaign, throwing in doubt just how fair Sunday’s election will 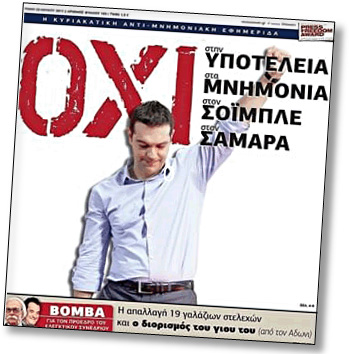 be. The snap referendum has already come under criticism for being called with too little notice by the left-wing Greek government — which is urging a “no” vote — to allow for proper campaigning and educating of voters.

….In a widely circulated examination of how the six biggest TV networks treated the rival referendum rallies Monday and Tuesday, freelance journalist Markos Petropoulos found that the pro-government “no” demonstration got about 81/2 minutes of coverage, whereas the “yes” protest received more than five times that much.

In another newscast, one network devoted 18 minutes to warnings and statements from European leaders about the breakdown of bailout negotiations with Athens and the surprise referendum announcement that had precipitated it. The Greek government’s position got two minutes.

The bias toward the “yes” side reflects the fact that many of Greece’s biggest news outlets are owned by corporate titans and other “oligarchs” whose business interests would be directly threatened by a “no” victory and the potential abandonment of the euro in favor of the drachma, [Nikolas] Leontopoulos said.

I suppose it’s no surprise that Greece’s corporate class is deeply unthrilled by Prime Minister Alexis Tsipras’s leftist government, and would be happy to see him humiliated and tossed out of office. I assume that they also prefer the devil they know—grinding European-imposed austerity for years—to the devil they don’t—exiting the euro amid chaos and eventually rebuilding their economy with a devalued drachma. After all, they’ll stay rich either way, and sticking with their fellow European moguls probably seems the better bet by far.