It appears that the Greek referendum is headed toward a landslide No vote. With about half of the votes counted as I write this, the No vote is very strongly in the lead and Greece’s interior ministry has released an official projection 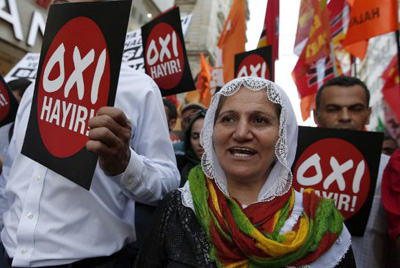 showing the No side winning 61 percent of the vote.

There are a couple of takeaways from this. First, I obviously don’t know squat about the Greek temperament. Let’s see now. What exactly is it that I said a few days ago? Oh yes, here it is:

In the end, the Greek public will be unwilling to back Tsipras in Sunday’s referendum and will vote to accept the European deal as is. The potential catastrophe of default and leaving the euro is just too scary for most of them to contemplate….So that’s my prediction. Unless Tsipras caves completely beforehand, the referendum will be held on Sunday and Greeks will vote to stay in the euro and accept Germany’s terms. It will basically be an unconditional surrender.

In technical terms, that was totally fucking wrong. Instead of caving in, the Greeks told Europe to take a hike. They refused to accept the austerity plan put in front of them and instead voted to support prime minister Alexis Tsipras’s effort to demand better terms. In general, that means they want Europe to (a) offer debt relief, (b) permit the Greek government to pass a higher budget supported by higher taxes; and (c) go a little easier on pension cuts.

The second takeaway is….oh forget it. Why listen to me anymore after this predictive debacle? Anyway, I don’t think anyone even knows what’s next now. Tsipras obviously has a vote of confidence and will stay in power. Angela Merkel and the rest of the Troika will have to decide whether to make a few concessions or simply refuse and let Greece twist in the wind. I honestly have no idea what they’ll choose. And the ECB will have to decide whether to keep Greece’s banks on life support for a while longer.

Stay tuned. It’s going to be a fascinating few weeks for those of us who don’t actually live in Greece and have to personally face the possibility of economic catastrophe.