From the Financial Times:

Hundreds of Chinese companies have halted trading in their shares as Beijing races to insulate the economy from the country’s steepest equity decline in over two decades. The list of suspended companies has reached 760 over the past week, representing more than a quarter of all companies listed on the Shanghai and Shenzhen exchanges, according to the Securities Times, a paper published by the Shenzhen Stock Exchange.

….Beijing has taken steps to keep stocks on China’s two main indices afloat, including direct purchases of large-cap companies, a halt to initial public offerings, and a cut to trading fees. But so far its efforts have failed to staunch concerns. “There is a panic but no matter how they [the authorities] jump in, this thing just doesn’t stop falling,” said Dong Tao, an economist at Credit Suisse.

So it looks like panicky moves from the authorities aren’t very effective at quelling panic in investors. I may have screwed up my Greece prediction, but at least I managed to get it right on this basic trait of human nature.

And speaking of Greece, what’s happening there? The Guardian reports:

The Greek government has been told by its eurozone partners not to expect debt relief any time soon, amid fading hopes of decisive action to stop 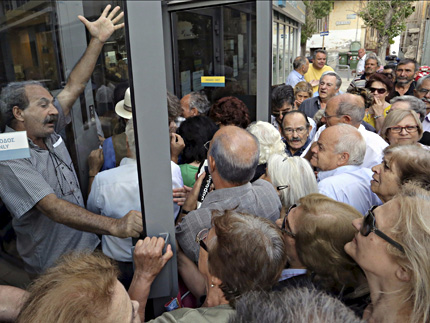 the country tumbling out of the currency union.

….Greek banks are on the brink of running out of cash, but senior European figures are already dampening hopes of any breakthrough. “What we are going to do today is to talk to each other and restore order,” said the president of the European commission, Jean-Claude Juncker, adding that there would be no overnight solution.

In a coordinated press statement, the leaders of France and Germany called on Greece to come up with “serious and credible proposals” at Tuesday’s summit which are consistent with its wish to stay in the eurozone….“We are not in the business of renegotiating debt,” said Finland’s finance minister, Alexander Stubb. “That was already done in 2011 and 2012,” referring to re-structuring of Greek debts that imposed heavy losses on private creditors.

Basically, the rest of the eurozone is telling Greece to pound sand. No debt relief, no bank rescue, nothing. They will listen to a new Greek proposal, but that’s it. And apparently Greece doesn’t have one. Today’s meeting has been postponed to Wednesday to give the Greeks more time to throw something together.

And anyway, it looks like everyone is starting to give up on Greece. The FT suggests that EU lawyers are quietly looking for ways to allow Greece to exit the euro, an effort supported in private by nearly everyone. Publicly, however, no one wants to take the blame for precipitating Grexit. “Everybody knows what the others should do, and do not want to do what the others expect them to do,” said one senior eurozone official.

That could be the eurozone’s official motto for the next few weeks. Stay tuned.