Our story so far: On June 22nd, Greece proposed an austerity package of spending cuts and tax increases worth about €8 billion over two years. European leaders called it a credible proposal, the first they had ever seen from Greece. By June 24th, they had changed their tune. They were roughly OK with the €8 billion figure, but didn’t like the Greek tax and spending plans for getting there. Later in the day, the Europeans responded by making substantial changes to the Greek proposal and sending back a heavily red-lined revision.

The Greek prime minister, Alexis Tsipras, was apoplectic, arguing that what mattered was meeting the deficit target, not meeting it in specific ways. “This odd stance seems to indicate that either there is no interest in an agreement or that special interests are being backed,” he said. Two days later he abandoned the talks and called a referendum on the 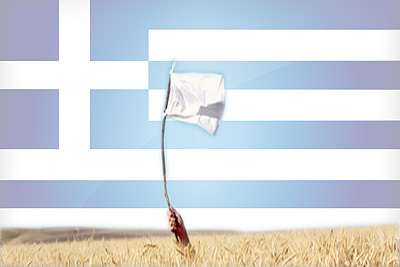 So how did that work out for Greece? Not so well:

Under a 10-page blueprint completed late Thursday, the country said it would undertake austerity measures worth between 12 billion and 13 billion euros ($13 billion to $14 billion), including raising taxes on cafes, bars and restaurants.

The amount is significantly higher than the package of cuts that Greek voters rejected in a hastily called referendum on the bailout Sunday. But nearly two weeks of a banking shutdown that has brought the economy to a virtual standstill have left this Mediterranean nation with few other options to avoid sliding into bankruptcy.

The Greek blueprint for pension cuts and VAT increases is essentially copied word-for-word from the June 24 European proposal. There may still be sticking points elsewhere (I haven’t done an exhaustive line-by-line comparison of the two documents), but VAT and pensions were always the key areas of difference. Combine those concessions with the higher deficit target in the new blueprint and Greece hasn’t just caved in to the Europeans, it’s all but prostrated itself and begged not to be kicked out of the eurozone.

Or so it seems. There’s always the possibility of gotchas hidden away in a stray word or two. But at a first glance, it looks like total capitulation. Two weeks of bank closings and import stoppages has given the Greeks a vivid taste of what life would be like if Europe forced it to abandon the euro—as it seemed they were all too willing to do—and that short taste was quite enough, thank you very much. Viewed through that lens, apparently another few years of German-enforced austerity didn’t look so bad after all.