Another year, another report from the Social Security Trustees. Here’s the basic chart, which shows the combined Social Security Trust fund becoming insolvent in 2034, one year later than last year’s projection. At that point, if nothing is done, benefit checks will be reduced about 25 percent. 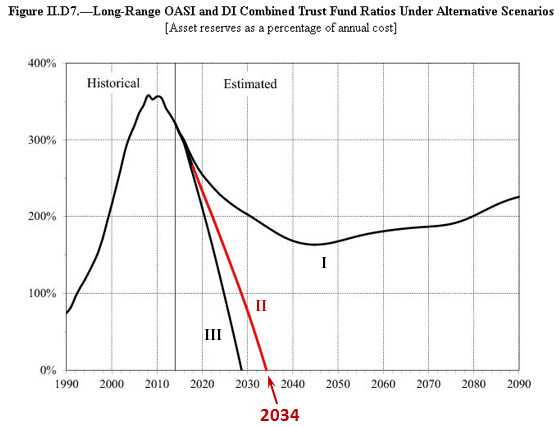 There’s not much change since 2014, as you’d expect since this stuff doesn’t change a lot from year to year. The bigger news is that if you pull apart OASI (old age benefits) from DI (disability), it turns out that DI is going to be insolvent next year. Everyone has known this for a while, so it’s no big shock. But next year is an election year, which means Congress either needs to come up with a fix this year, while everyone is mesmerized by Donald Trump, or else put it off until next year, when they’ll have to do it under the blazing white klieg lights of a presidential campaign.

It’ll probably be next year, since Social Security traditionally doesn’t get fixed until it’s literally a few days away from not sending out checks to people. That should make this a great campaign issue between Republicans, who think DI is going broke because too many lazy bums are gaming the system, and Democrats, who mostly think it’s going broke because boomers are retiring and the economy is still weak.

So who wins this argument? Republicans have a story that will appeal to their base audience, but when you finally get to the point where checks to disabled people are being reduced—or not being sent out at all—that tends to concentrate the mind wonderfully. Public opinion will likely end up on the side of the disabled, especially since the usual fix (moving a bit of money from OASI to DI) is cheap and painless.

But we’ll see. In any case, this is a fight that can’t be avoided. You can count on it becoming a focal point of next year’s campaign.