The American economy added 223,000 new jobs last month, 90,000 of which were needed to keep up with population growth. This means that net job growth clocked in at 133,000 jobs and the unemployment rate fell to 5.3 percent.

Unfortunately, this isn’t the mediocre news it looks like. It was all bad news. Essentially the entire decrease in the unemployment rate was due to 432,000 people leaving the labor force, reversing an increase of 397,000 last month. Because of this, the labor force participation ratio declined by 0.3 percentage points to 62.6 percent, the lowest number in recent history.

Oh, and we had downward revisions of 60,000 jobs in April and May. And hourly wage growth of production and nonsupervisory workers was up by a measly 2 cents, a nominal increase of 0.1 percent. Adjusted for inflation, that’s a decrease of about 0.3 percent.

I don’t know how to dress this up. The net number of new jobs was OK, if not spectacular, but the rest of the report is just dismal. The number of people actually employed dropped by 56,000, labor force participation has tanked, and real wage growth was negative. If anyone else can put lipstick on this pig, they’re welcome to try. It looks pretty gruesome to me. The only good news I can take out of it is that this is only a single month’s data, which jumps around quite a bit. Maybe next month will be better. 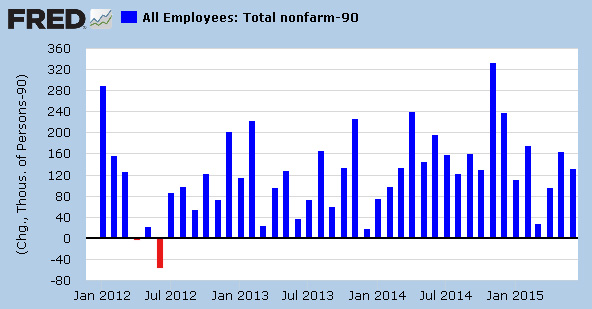