Bobby Jindal has become such an increasingly pathetic figure that I find it hard to work up the nastiness to even mock him in a blog post these days. But Jordan Weissmann links today to a piece in the Baton Rouge Advocate that’s truly mind bending. Jindal desperately needs to raise revenue this year 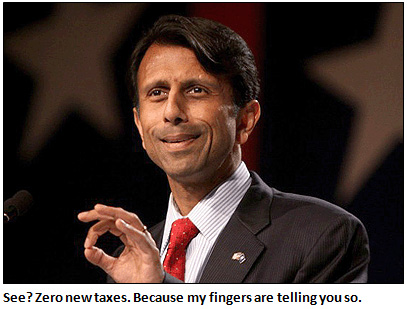 because he’s left Louisiana in a huge budget hole thanks to his true-believer tax-cutting mania. But Grover Norquist won’t allow him to raise revenues. What to do? Here’s the Advocate explaining the Jindal/Norquist-approved SAVE program:

It would assess a fee of about $1,500 per higher education student and raise about $350 million total, but only on paper. Students wouldn’t have to pay anything because an offsetting tax credit for the $1,500. Nor would universities receive any new money.

However, the SAVE fund would create a tax credit for the $350 million that Jindal could use to offset $350 million of the new revenue that legislators are proposing to raise.

I’m not sure that’s entirely clear, but I think I understand what’s going on. Let’s break it down:

WTF? All these years Grover Norquist has been terrorizing Washington with his no-new-taxes pledge, but it turns out that this is all it takes to wiggle your way around it? If we’d known this we sure could have avoided an awful lot of stubborn confrontation on Capitol Hill over the past couple of decades. I can think of a hundred ways we can use this dodge in the future.

You know, I live in California and we’ve engaged in a whole lot of budget smoke and mirrors over the years. So I hardly need smelling salts when I hear about state governments pushing the envelope during budget season. But this truly boggles the mind when it comes to sheer dumbness. Maybe next they’ll just start minting their own Louisiana bucks and paying for stuff that way.