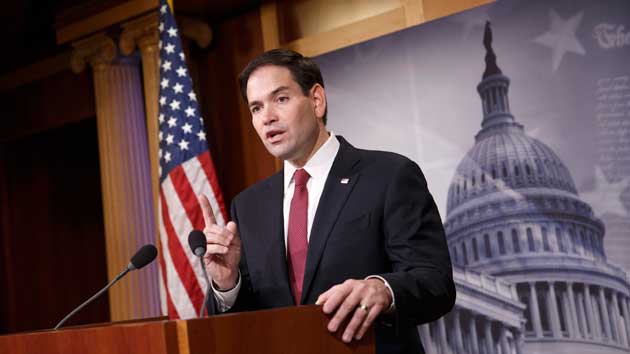 Sen. Marco Rubio favors the Liam Neeson "Taken" strategy: "We will look for you, we will find you, and we will kill you."J. Scott Applewhite/AP

It seems like only yesterday that the conventional wisdom was that the Republican Party was on the cusp of a major shift in philosophy: The libertarians had made huge inroads into the party and the rank and file was very, very taken with their agenda—most especially their isolationist foreign policy. The fact that there are exactly two senators who might be called true libertarians, Rand Paul and Mike Lee, and no more than a handful in the House, did not strike political observers as evidence that Republican voters might not be quite as enthusiastic in this regard as they believed.

For a piece entitled “Has the Libertarian Moment Finally Arrived?” in the New York Times magazine last August, journalist Robert Draper spent some time with a few “libertarian hipsters.” He was apparently smitten with their hot takes on various issues, and how they were changing the face of Republicanism as we know it. Of course, there’s nothing new about libertarians and conservatives walking hand in hand on issues of taxation, regulation, and small government, which orbit the essential organizing principle of both movements. Where libertarians and Republicans disagree most is on social issues like abortion, marriage equality, and drug legalization. (The libertarian-ish GOPers have found a nice rhetorical dodge by falling back on the old confederate line that the “states should decide,” which seems to get them off the hook with the Christian Right, who are happy to wage 50 smaller battles until they simply wear everyone down or the Rapture arrives, whichever comes first.)

This was now a return to “the real” GOP philosophy, as if the last 70 years of American imperialism never happened.

But what Draper and many other beltway wags insisted had changed among the GOP faithful was a new isolationism which was bringing the rank and file into the libertarian fold. They characterized this as a return to “the real” Republican philosophy, as if the last 70 years of American imperialism never happened. Evidently, the ideological north star of the GOP remains Robert Taft, despite the fact that 95 percent of the party faithful have never heard of him. After quoting Texas Gov. Rick Perry saying that we should cut costs by closing prisons, Draper asserted:

The appetite for foreign intervention is at low ebb, with calls by Republicans to rein in federal profligacy now increasingly extending to the once-sacrosanct military budget. And deep concern over government surveillance looms as one of the few bipartisan sentiments in Washington…

The bipartisan “concern” over government surveillance is unfortunately overstated. Polling shows that it ebbs and flows depending on which party is doing it. And regardless of the sentiment, the default solution is to fiddle at the edges, legalize the worst of it, and call it “reform.”

And while it is correct to say that Republicans loathe what they perceive as “federal profligacy,” there is little real evidence that they think reigning in the military budget is the proper way to cut spending. Politico quizzed a group of activists and “thought leaders” in Iowa and new Hampshire recently on the subject who said that federal debt was their primary concern and suggested that cutting the defense budget had to be on the table. But polling tells a different story. The Washington Post‘s Chris Cillizza noted this in the latest NBC-WSJ survey:

Republicans say that national security/terrorism is the single most important issue facing the country.

More than a quarter of Republicans (27 percent) chose that option, putting it ahead of “deficit and government spending” (24 percent) and, somewhat remarkably, “job creation and economic growth” (21 percent), which has long dominated as the top priority for voters of all partisan stripes.

Beyond those top line numbers, there are two other telling nuggets in the data.

The second is that national security is a rapidly rising concern for Republicans. In NBC-WSJ poll data from March 2012, just eight percent of Republicans named it as the most important issue for the government to address.

The GOP has carefully laid the groundwork for a full-scale assault on Hillary Clinton on this front with their Benghazi crusade.

Cillizza reported that a “savvy Republican operative” explained that this threefold increase in concern can be attributed to the rise of ISIS and the movie American Sniper arousing the militarist urge in the GOP base. That may be true, but let’s just say it was never exactly deeply buried. In the aftermath of the latest disaster of nationalist bloodlust, they kept a low profile just long enough for the rest of the country to get past the trauma of George W. Bush and Dick Cheney. But it didn’t take ISIS or a Clint Eastwood movie for the right’s patriotic fervor to return; it is one of the ties that binds the coalition together, and it’s never dormant for long.

Moreover, no one should be surprised to see national security returning to the top of the agenda as Republicans set their sites on the first woman Democratic nominee for president. After all, they have spent many decades portraying the men of the Democratic Party as little better than schoolgirls on this front. You can be sure they will not forsake the tactic in the face of an actual woman candidate. Indeed, they’ve carefully laid the groundwork for a full-scale assault on Hillary Clinton’s capabilities in this department with their Benghazi crusade. And as Heather Hurlburt pointed out recently in the American Prospect, there is good reason for Dems to be concerned here:

The majority of voters express equal confidence in men and women as leaders, but when national security is the issue, confidence in women’s leadership declines. In a Pew poll in January, 37 percent of the respondents said that men do better than women in dealing with national security, while 56 percent said gender makes no difference. That was an improvement from decades past, but sobering when compared to the 73 percent who say gender is irrelevant to leadership on economic issues.

Yet, aside from the fact that the GOP base has been hawkish on national security for at least 70 years, and that their best opportunity to defeat the (presumed) first woman presidential candidate may lie in deep voter anxieties about a woman’s ability to execute the role of commander in chief, we are to believe that Republicans are going to run in 2016 on an isolationist platform. If that’s the case, the GOP presidential candidates didn’t get the memo. As Karen Tumulty reported recently in the Washington Post:

As recently as two years ago, it appeared that the 2016 presidential contest was likely to become a monumental debate within the Republican Party over national security and foreign policy.

But not anymore. Although national security is Topic A for the growing field of candidates for the GOP nomination, it is becoming harder to discern any differences among them.

The contenders are a hawkish group—at least in their sound bites. Sen. Rand Paul (R-Ky.) has been the most skeptical of military intervention and government surveillance, but even he has proposed increasing defense spending and staged an event during his announcement tour in front of an aircraft carrier in South Carolina.

That’s right, even Rand Paul is proposing to increase defense spending. And the rest of them are sounding more like cartoon movie heroes than presidential candidates on the stump (perhaps lending some support to that American Sniper theory). Florida Sen. Marco Rubio, who just released his very muscular national security manifesto, the “Rubio Doctrine,” probably wins the award for most hawkish speech thus far, thanks to this bit during a recent meeting of GOP candidates in South Carolina:

But lest he be construed as some kind of touchy feely, wimpy Wisconsin cheese-eater, he then brought the house down with a red-meat cri de coeur:

The crowd came to its feet and cheered.

Frankly, I feel a little bit sorry for poor old Rick Perry who, back in October, delivered what may be the most aggressive warhawk speech of the cycle so far—before anyone was paying attention. He spoke in London, where there’s no shortage of national security anxiety these days:

What all of these various hate groups have in common is a disdain for, and a wish to destroy, our Western way of life.

And someone needs to tell them that the meeting has already been held. It was decided, democratically, long ago—and by the way through great and heroic sacrifice—that our societies will be governed by Western values and Western laws.

Among those values are openness and tolerance. But to every extremist, it has to be made clear: We will not allow you to exploit our tolerance, so that you can import your intolerance. We will not let you destroy our peace with your violent ideas. If you expect to live among us, and yet plan against us, to receive the protections and comforts of a free society, while showing none of its virtues or graces, then you can have our answer now: No, not on our watch!

You will live by exactly the standards that the rest of us live by. And if that comes as jarring news, then welcome to civilization.

(Prime Minister David Cameron seems to have taken notes: He was reportedly set to say pretty much the same thing in his Queen’s speech, while adding some meat to the bone by proposing various kinds of government censorship and suppression of activity.)

It’s obvious that the GOP is not making the big switch to isolationism any time soon. So what are all those libertarian Republicans going to do? Are they willing to suck it up and sign on to the GOP’s imperial project, once again selling out their most deeply held views about America’s place in the world for a couple of cheap tax breaks? It’s not as if they have to. There is one candidate in the race who has a long record of antiwar positions and is fully onboard with shrinking the military industrial complex until it only needs a bathtub in which to float. He has no interest in worrying about American “prestige” around the world or spending any blood and treasure on behalf of commercial interests.

His name is Bernie Sanders in case anyone is wondering. He’s even an Independent, one of the very few in the US Congress. Unfortunately, it’s highly unlikely that any libertarians will join his campaign. Which is also quite telling. When it comes to making a choice between voting against war and voting for tax breaks for millionaires, tax breaks for millionaires wins every time. Their priorities have always been clear—and the leaders of the Republican Party know they’ll never have to change a thing to buy their loyalty.