A new Kaiser poll gives us an in-depth look at what people think about health insurance plans purchased through an Obamacare exchange. Some of the results are unsurprising: people like plans with low deductibles; most say it was easy to shop for a plan; and most were pretty satisfied with the plans they purchased. But unless I’m badly misreading something, there’s one result that’s pretty gobsmacking. First off, here’s a chart showing basic satisfaction levels with Obamacare plans:

That’s pretty good. Positive responses increased a bit from 72 percent to 74 percent. That compares very favorably with satisfaction levels toward employer plans. But now take a look at this chart that breaks down Obamacare favorability attitudes by party: 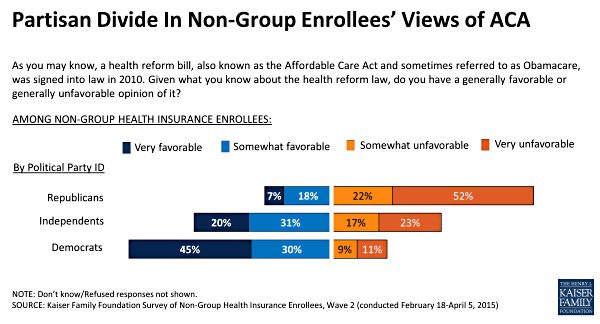 This is crazy. This isn’t a general survey of all Americans. It’s a survey specifically of people who don’t have group coverage. Most of them (probably more than two-thirds) have actually purchased Obamacare plans and therefore have personal experience with them, but favorability is nonetheless still driven mostly by party ID. You can buy an ACA plan on the marketplace, get a subsidy, and be happy with your plan—but if you’re a Republican you still overwhelmingly hate Obamacare by 74-25 percent.

Folks, that is hardcore.