What has caused the explosive growth of income inequality over the past three decades? Is it the fact the CEO pay has skyrocketed, leaving everyone else behind? Maybe. But according to a new paper, that’s not quite the right story.

Basically a group of researchers at NBER have concluded that inequality between firms has skyrocketed, and employees of those firms all go along for the ride. A small number of “super firms” have become enormously successful, and within these super firms inequality between the CEO and the worker bees hasn’t changed much at all. They pay all their employees more than the average firm, from the CEO down.

The chart on the right tells the story. Ignore the green line for the moment and just look at the blue and red lines. The red line shows that the top tenth of firms have far outperformed everyone else. The blue line shows 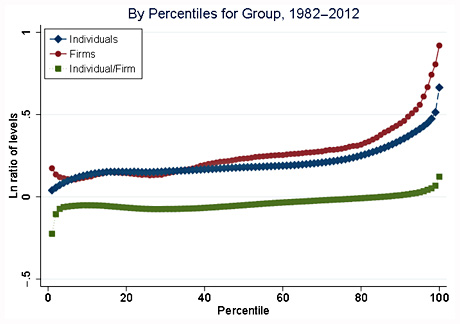 that workers follow the same pattern. The ones who work for the top firms get paid a lot more than the folks who work for average firms.

As it turns out, some industries have more super firms than others and thus contribute more to growing income inequality. The FIRE sector—Finance, Insurance, Real Estate—is the most obvious example. Both firm revenue and individual compensation has gone up far more than in any sector. But other sectors have their superstars too, and individuals at those firms get paid a lot more than a similar worker at a firm that’s not doing so well.

Matt O’Brien suggests that this means nearly every industry is now part of the winner-take-all economy. In the same way that modern technology allows a tiny subset of superstar singers or actors to earn huge audiences (and huge paychecks), perhaps it also enables modern firms to do the same. And it could be self-reinforcing. The super firms can afford to hire the best workers, and that in turn drives even more unequal growth.

In any case, if the authors are right, it matters a lot which firm you work for. If you pick the right one, you might ride the income inequality gravy train right to the top. In not, you probably won’t.