Friend of the blog Jay Jaroch recently spent some time in Cuba. Here’s the first of three posts about what he observed while he was there.

If you’re looking for a country that has solved the problem of income inequality, look no further than Cuba, where everyone has next to nothing. And that’s not snark. It’s an economic reality that quickly presents itself to any Westerner who spends some time there, as I did this month.

Soon after President Obama loosened the travel restrictions, domestic debate about Cuba’s economic future in a post-embargo world split into two predictable camps: those who worried that America would “ruin” Cuba with a heavy dose of fanny-packed tourists and Panera Breads, and those who dismissed this as the “fetishization of poverty” and welcomed the introduction of American-style capitalism as a long overdue tonic. The reality is that these are mostly debates Americans are having about their views of America. Cubans, one quickly learns, are too economically desperate to care.

Havana is unique and dilapidated and strangely beautiful. You almost admire it in the same way you would distressed furniture, or Keith Richard’s face. Havana looks a bit like a hurricane hit the French Quarter of New Orleans in 1965 and no one bothered to clean it up. Zoom in and you’ll find 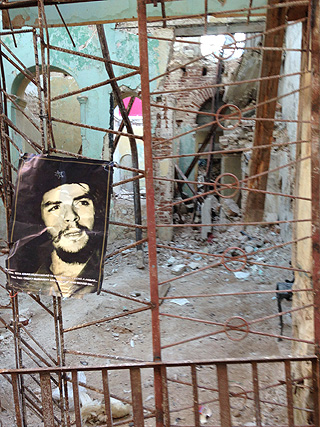 men standing in front of a partially collapsed building holding menus imploring you to come to their paladares next to stray dogs fucking in the street next to a group of Canadian tourists in faux revolutionary berets next to a woman selling fruit from a cart that most Americans wouldn’t eat on a dare. It’s all here.

Without exception, the Cubans I talked to welcomed the thawing of relations with the US, and even more so the coming influx of American tourists. One quickly learns why: because too much of their day-to-day economy is reliant on tourist dollars and euros. America is simply the biggest account they could land, and that’s why they’re hopeful. Also cautious, and not so much because they’re worried about Starbucks; it’s because they’re worried their government will mismanage their chance at a better life. The sense was: Raul is finally allowing for some small, common-sense reforms that would have been impossible under Fidel. President Obama is allowing for some small, common sense reforms that will allow Cubans greater access to American dollars. Let’s not screw this up. (More on that tomorrow.)

Outside Havana, the economic stagnation is even more acute. In Cienfuegos, a middle school English teacher named Alex, who had never spoken to an American before, wanted to know what a teacher of his experience would make in Los Angeles. I told him around $75,000 a year. “$75,000 American dollars,” he replied, shaking his head. “I earn 18 dollars a month.” Alex was hardly unique—monthly salaries in Cuba run from about $14 to $20.

In Trinidad, a city about five hours southeast of Havana, an older man sitting in his doorway stopped me on my way down the street. He wanted me to give the Americans a message: “Hay mucha musica, pero nada de trabajo.” We have lots of music, but no work.

This jibed with what I’d seen of Trinidad. Other than the jobs related to tourism, I couldn’t discern any other source of employment. Pablo, my host in Trinidad, was a civil engineer by trade, but a taxi driver by necessity. On one trip through town I asked him what jobs were available to locals beyond the tourist trade. He replied that there weren’t any. I found that hard to believe so I asked the same question of an art gallery employee. I got the same answer—there aren’t any other jobs. The only money coming in to that part of the country came from abroad, either in the form of remittances from family members or from tourism. We were, quite literally, the only game in town.

In some respects, both sides of the American debate can stand down. Cuba is neither ready for Pizza Hut nor gearing up for broad-based market reforms. Yes, Cuba is changing. People who had been there five or even two years before would tell me how much had already changed. But the reality is that they’re starting, slowly, to dig out from a half century deep hole. The infrastructure is in such disarray that they couldn’t take a large scale influx of American tourists if they wanted to. And they want to.

No one really knows what happens next. But this much seems clear: if you want to see what Cuba was like under socialism, you can come next year. You can come in three years. Five. Ten. It will still be there.

Next: What Cubans think of Hillary Clinton and Marco Rubio.