CNN will be hosting the second Republican debate, and they’ve come up with a….unique way of dealing with the fact that there are just too damn many candidates. To handle the crowd, they’re going to have two separate debates:

“The first 10 candidates — ranked from highest to lowest in polling order from an average of all qualifying polls released between July 16 and September 10 who satisfy the criteria requirements … will be invited to participate in ‘Segment B’ of the September 16, 2015 Republican Presidential Primary Debate,” the network states in its candidate criteria. “Candidates who satisfy the criteria and achieve an average of at least 1 percent in three national polls, but are not ranked in the top 10 of polling order will 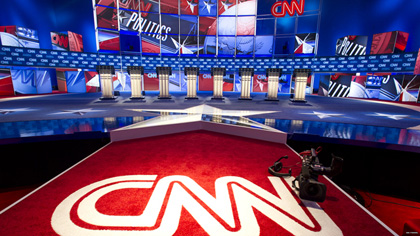 be invited to participate in ‘Segment A’ of the September 16, 2015 Republican Presidential Primary Debate.”

Did you get that? All the yokels—Carly Fiorina, Bobby Jindal, Rick Santorum, etc.—will go on first. They’ll be sort of the warm-up act. Then they’ll get shuffled off the stage and the big guns will have prime time all to themselves. This is pretty humiliating for the also-rans, but presumably if they play by the rules they’ll have a chance to move up, just like in English Premier League soccer. Perhaps Rick Perry will stumble and get relegated to the minor leagues for the next debate, while Jindal will knock everyone’s socks off and get promoted to the show. I don’t know if I’d quite call this “fun,” but it would certainly make for some interesting office pools.

The first debate, which is hosted by Fox, will feature none of this nonsense. The top ten candidates will be invited to the debate, and that’s that. If you’re outside the top ten, you can watch the debate on your big-screen TV at home. Or, if Fox is feeling generous, perhaps the sad sacks polling at the 1% level will be allowed to while away their time in the spin room, where they can try to buttonhole reporters and explain why they really should have been up on the stage. Maybe the saddest story will win a prize.