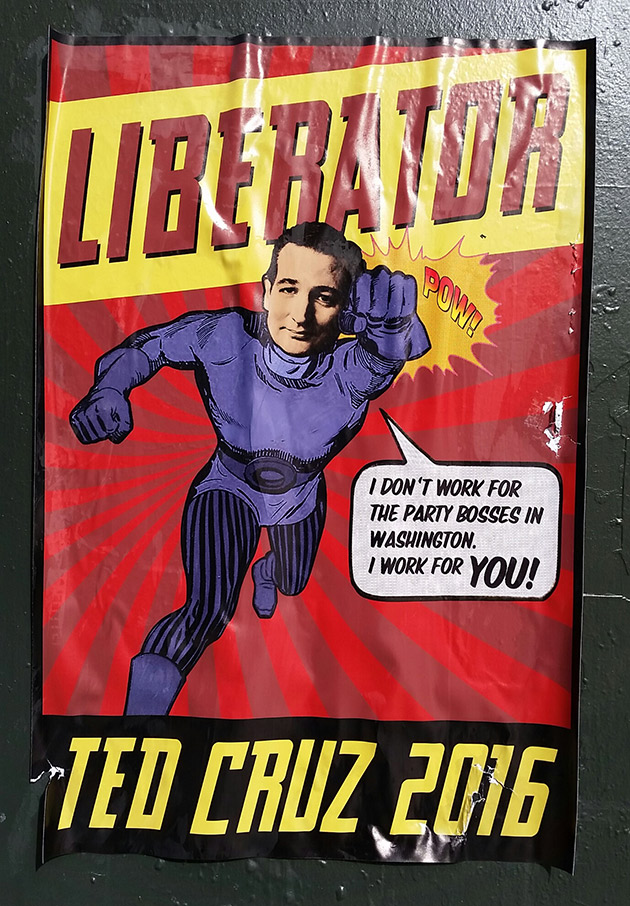 Is this the first salvo in the 2016 presidential campaign poster wars? This past week, somebody plastered this poster—guerilla style—at well-trod locations around San Francisco.

What was the artist thinking? Was this a subtle jab at Cruz’s hubris or a bona fide attempt to promote the guy—or just a cool design? I could see it psyching up the GOP base in Kevin’s Orange County stomping grounds. But in San Francisco? Only 13 percent of this city voted for Romney. A Ted Cruz fan hoping to boost the Texas senator’s presidential hopes would be wasting his time posting these around here—even if they are pretty cool looking.

Maybe the message was meant to reach rich tech libertarians who have moved north from Silicon Valley and might be game to donate. You know, the crew who admire Ron and Rand Paul and seem to have forgotten that the tech industry was built on massive government funding. Then again, given Cruz’s head-scratching position against net neutrality—he’s called it “the biggest regulatory threat to the internet”—he’s not likely to get much love from the tech world. Even the Obama-haters on Cruz’s Facebook page had to ridicule his position.

My favorite Cruz poster to date went up last March around Beverly Hills, where Cruz was slated to appear at the annual dinner of the conservative Claremont Institute. (The artists, being artists, got the hotel wrong.) But Cruz was indeed, as the poster joked, “loving it.” Here’s what he tweeted:

Saw this, but noticed an error. So I wanted to make one thing clear: I don’t smoke cigarettes http://t.co/3nn2740kkP pic.twitter.com/tPFNqg9vu8

I just hope Bernie Sanders, the left’s favorite bomb thrower, decides to run. I’m dying to see what street artists will make of him.