Are the poor blowing their food stamps in wild bacchanalias of filet mignon and lobster thermidor? Is this something that we ought to keep a closer look on as protectors of the public purse?

You can probably figure out the answer already, but, um, no. Here are some relevant monthly figures for food spending 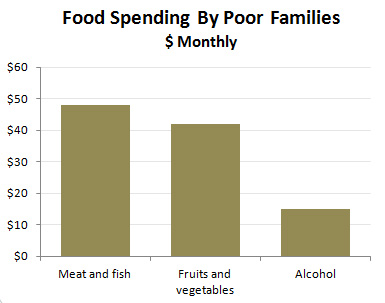 among the poor, as collected by the Consumer Expenditure Survey:

Pretty obviously, there’s a lot more baloney and chicken breasts here than steak and lobster. And this doesn’t change a lot as you move up the income scale. The numbers above are for the poorest tenth of consumers, but they stay about the same even when you move slightly up the income ladder. The entire poorest third spends only about $323 total on food per month.

Should we encourage better nutrition and better food choices among the poor? Less McDonald’s and more broccoli? For all sorts of reasons, of course we should. But should we be worried that public money is being squandered on prime rib or fresh Pacific swordfish? Nope. There’s just no evidence that it’s happening except as the occasional scary anecdote. It’s a non-problem.

Max Ehrenfreund has more details here if you want some comparisons between rich and poor in various categories of consumer expenditures.