When Freddie Gray was 22 months old, he had a tested blood lead level of 37 micrograms per deciliter. This is an absolutely astronomical amount. Freddie never even had the slightest chance of growing up normally. Lead poisoning doomed him from the start to a life of heightened aggression, poor learning abilities, and weak impulse control. His life was a tragedy set in motion the day he was born.

But even from the midst of my chemo haze, I want to make a short, sharp point about this that goes far beyond just Gray’s personal tragedy. It’s this: thanks both to lead paint and leaded gasoline, there were lots of teenagers like Freddie Gray in the 90s. This created a huge and genuinely scary wave of violent crime, and in response we turned many of our urban police forces into occupying armies. This may have been wrong even then, but it was hardly 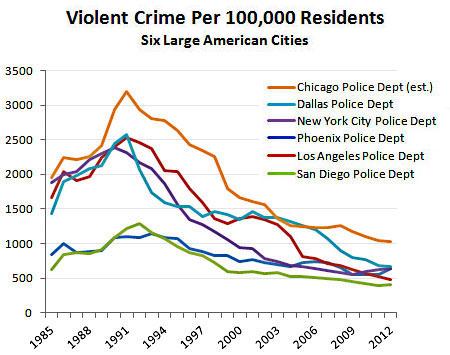 inexplicable. Decades of lead poisoning really had created huge numbers of scarily violent teenagers, and a massive, militaristic response may have seemed like the only way to even begin to hold the line.

But here’s the thing: that era is over. Individual tragedies like Freddie Gray are still too common, but overall lead poisoning has plummeted. As a result, our cities are safer because our kids are fundamentally less dangerous. To a large extent, they are now normal teenagers, not lead-poisoned predators.

This is important, because even if you’re a hard-ass law-and-order type, you should understand that we no longer need urban police departments to act like occupying armies. The 90s are gone, and today’s teenagers are just ordinary teenagers. They still act stupid and some of them are still violent, but they can be dealt with using ordinary urban policing tactics. We don’t need to constantly harass and bully them; we don’t need to haul them in for every petty infraction; we don’t need to beat them senseless; and we don’t need to incarcerate them by the millions.

We just don’t. We live in a different, safer era, and it’s time for all of us—voters, politicians, cops, parents—to get this through our collective heads. Generation Lead is over, thank God. Let’s stop pretending it’s always and forever 1993. Reform is way overdue.