The American economy added 295,000 new jobs last month, 90,000 of which were needed to keep up with population growth. This means that net job growth clocked in at 205,000 jobs, which is quite a bit better than January and represents a nice confirmation that the labor market has picked up over the past four months. Virtually all of the growth was in the private sector.

The headline unemployment rate went down to 5.5 percent, but this was due to a combination of more people getting jobs and more people dropping out of the labor force and no longer being counted in the unemployment numbers. So this is a fairly mixed report. Unsurprisingly, since it doesn’t represent a huge growth in the actual number of people employed, wages remained sluggish. Average hourly earning went up three cents, or 0.12 percent. Moody’s Mark Zandi tried to put a positive spin on this: he told the New York Times that “current wage growth data appeared gloomier than the underlying reality, in part because of demographic factors. As well-paid baby boomers enter retirement, to be replaced by younger workers starting out at lower salaries, he said, the overall wage pattern has tilted slightly lower. Also, people who have been out of work for long stretches are starting to come back into the labor force and accepting lower wages.”

So….not bad. But not quite as good as the top line number suggests. We’re still motoring along, but we’re still in second gear. We still haven’t really seen a sharp shift upward. 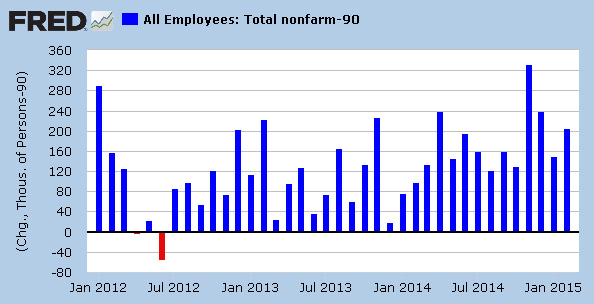