A couple of weeks ago Pew did a poll about government policies during the recession, but I’ve been too sick to blog about it. However, it’s stayed safely in my Saved Stuff folder awaiting my recovery, so here it is today. It’s really two charts. Here’s the first one: 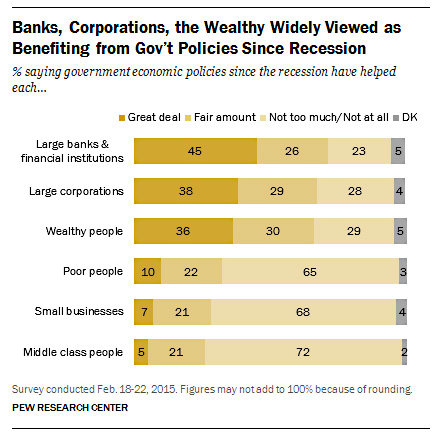 Nothing too surprising about this. Generally speaking, people think the government did a lot to help out banks (bingo!), large corporations, and the wealthy. The poor and the middle class pretty much got nada. Since any poll like this is going to be dominated by the sheer number of poor and middle class respondents compared to wealthy respondents, this is about what you’d expect.

But now take a look at this table: 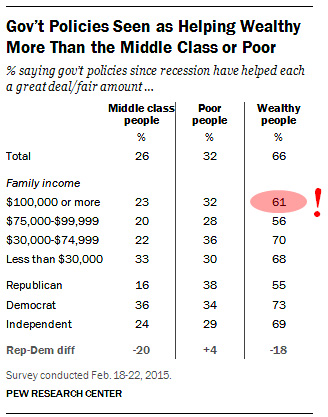 That’s amazing. Even those with high incomes agree that wealthy people benefited the most from government policies and that the poor and middle class got bupkis. Even Republicans largely agree that this has been the case.

This is Stockholm Syndrome writ large. Everyone—rich, poor, Republican, Democrat—agrees that in the wake of the greatest financial disaster since the Great Depression, the government mostly turned its largesse on banks, big corporations and the wealthy. Nonetheless, Republicans—the longtime party of banks, big corporations and the wealthy—have done increasingly well over the past six years. For an explanation, take your pick:

Whatever the reason, only about 20 percent of middle-class voters think government policies benefit the middle class. The first party to figure this out and embrace it wholeheartedly has a huge electoral opportunity ahead of it. But first, they’re going to have to ditch the rich. Can either of them ever do that?