First it was the police union in New York City, now it’s the transport workers union:

The arrest last week of a bus driver who struck a 15-year-old girl angered union officials, who sent a memo to members this week warning that bus drivers were 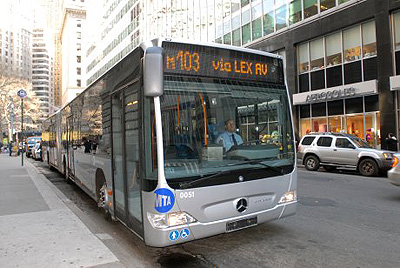 The union, Transport Workers Union Local 100, says the arrest on Friday of the driver, Francisco DeJesus, a veteran with the Metropolitan Transportation Authority, was uncalled-for….Mr. DeJesus was charged with failure to yield after his bus struck the girl as she was crossing the street with a walk signal in Williamsburg, Brooklyn, on her way to school. She was pinned under the front of the bus, and her leg was severely injured.

….Union officials argue that accidents can happen despite bus operators’ best efforts. Making a left turn without a traffic signal can be difficult, city streets are chaotic, and there are blind spots in the bus equipment, John Samuelsen, president of the Transport Workers Union, said on Wednesday. “In this case,” he said, referring to Mr. DeJesus, “there was no indicator, despite the heartache of the tragedy, that the bus operator did anything reckless.”

Come on. This is the worst excuse ever. Making a left turn without a signal on a busy street is difficult for everyone, not just bus drivers. That’s hardly a good reason to just let it pass.

I sympathize with the union’s position to the extent that anyone who drives a lot is more likely to be involved in an accident, and that’s not necessarily evidence of recklessness. It’s just evidence that you drive a lot. But plenty of people drive a lot. Truckers. Delivery vans. Taxi drivers. Sales people. And if they hit someone, they’re held accountable. That doesn’t mean they’re always convicted and jailed, but it does mean they’re (sometimes) arrested and then investigated. What else are police supposed to do?

A bus driver’s union card is not like a 007 license to kill. Working for the government is not a Get Out Of Jail Free card. If you run over someone, you’re probably going to be arrested and you’re certainly going to be investigated. If you did nothing wrong, then charges will be dropped. If a prosecutor concludes you did do something wrong, you’ll get a fair trial. It’s crazy to expect anything different.