This morning, Kate Bachelder went into McDonald’s to get an Egg McMuffin. When she tried to pay the cashier, however, things turned weird:

I wouldn’t need money today, she explained, as I had been randomly chosen for the store’s “Pay with Lovin'” campaign, the company’s latest public-relations blitz, announced Sunday…Between Feb. 2 and Valentine’s Day, the company 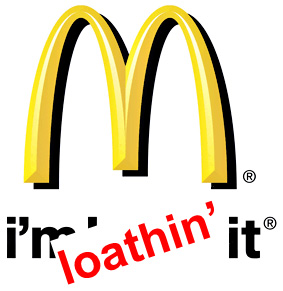 says, participating McDonald’s locations will give away 100 meals to unsuspecting patrons in an effort to spread “the lovin’.”

If the “Pay with Lovin'” scenario looks touching on television, it is less so in real life. A crew member produced a heart-shaped pencil box stuffed with slips of paper, and instructed me to pick one. My fellow customers seemed to look on with pity as I drew my fate: “Ask someone to dance.” I stood there for a mortified second or two, and then the cashier mercifully suggested that we all dance together. Not wanting to be a spoilsport, I forced a smile and “raised the roof” a couple of times, as employees tried to lure cringing customers into forming some kind of conga line, asking them when they’d last been asked to dance.

The public embarrassment ended soon enough, and I slunk away with my free breakfast, thinking: Now there’s an idea that never should have left the conference room.

Speaking personally, I can say that the Pay With Lovin’ scenario did not look touching on television. It looked horrifying. And I suspect very strongly that in real life it’s even more horrifying than my feeble little imagination can imagine.

And for what it’s worth, when I saw the ads, it actually wasn’t Mickey D’s guinea pig customers who I initially felt sorry for. It was the cashiers. Those are the poor folks who have to execute this marketing monstrosity. Every morning they have to paste on a smile and pretend to be thrilled at the opportunity to force some sleepy customer to write a poem or declare who she loves or perform a jig or whatever. Isn’t it exciting!?! You get to pay with lovin’ today!

Somebody needs to be fired at McDonald’s. Maybe a whole bunch of people. I don’t know who, but someone has to pay. Right now.