What happens if the Supreme Court somehow persuades itself that Obamacare subsidies shouldn’t be available to people in states that rely on the federal exchange? Answer: in the red states that have refused to operate their own exchanges, lots of people would lose their subsidies— 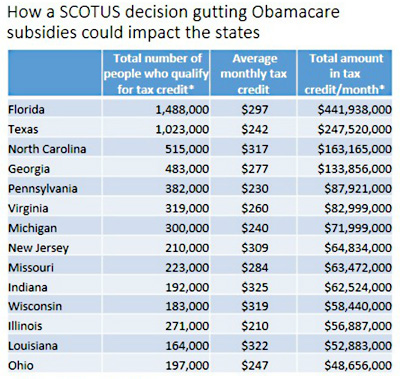 and most likely lose their health insurance too, since they could no longer afford it.

We already know that most red-state governors don’t care about that. After all, if they did care they’d accept Obamacare’s Medicaid expansion, which would provide health care to millions of their residents. So Greg Sargent takes a different tack today. What would it mean to state economies if their subsidies go away? Sargent’s rough calculations are on the right. Florida, for example, would lose about $5 billion per year, which would be a hit to its economy. Would that be likely to convince its governor to start up a state exchange so that subsidies would keep flowing?

Sadly no. Florida has a state GDP of about $750 billion. The loss of $5 billion would represent about half a percent of the state’s economy. That’s not nothing, but it’s close. And it’s certainly not enough to make up for the opprobrium of being thought soft on Obamacare.

So….nice try. But I think we’re pretty much where we’ve always been: it’s going to be yelling and screaming from constituents and lobbyists that eventually gets red-state governors (and legislatures) to accept any part of Obamacare that they have a choice about. It’s anyone’s guess when that yelling will finally get loud enough.