Classy, as always. But I bring it up to make a particular point. It’s unlikely, I think, that Walker will repudiate Giuliani’s comments. But Jeb 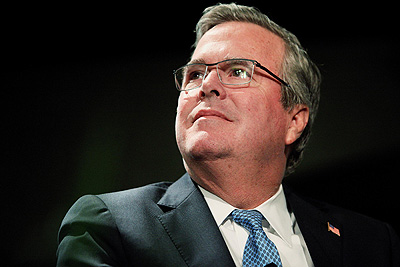 Bush could—and if he’s smart, he will.

Here’s why. It would cost him some support among the tea party set, but he’s not going to get a lot of support there anyway. What’s more, he doesn’t really need it. All Jeb has to do to win is follow the Romney strategy: sweep up all the votes of the Republican moderates while everyone else fights over scraps of the tea party vote. Taking a public stand against Giuliani would cement his position as the adult in the Republican field, a position that Mitt Romney rode to the GOP nomination in 2012.

But the Romney strategy only works if Jeb is the sole adult running. Walker is trying to straddle the line between mainstream and tea party, and if he can pull it off he’ll win. Jeb’s team has to make sure he can’t do that, and the best way to accomplish this is to take a few high-profile stands—like denouncing Giuliani’s views—that Walker isn’t willing to emulate. If Jeb can force Walker to make some moves early on that paint him as a pure tea party creature, that could permanently hurt him. And with Romney out and Chris Christie looking weak, Jeb could then have the centrist Republican vote all to himself. That could put him in the White House.

But he has to go big and go fast. Denounce Giuliani in terms strong enough to get some attention, and in a way that’s likely to push Walker into making a mistake. The race is on.