The American economy added 257,000 new jobs last month, 90,000 of which were needed to keep up with population growth. This means that net job growth clocked in at 167,000 jobs. This is lower than last month, but only because December’s results were revised sharply upwards. The combined revisions for November and December clocked in at 147,000 jobs, which suggests that for the past quarter job growth has been clipping along at a faster pace than we thought. What’s more, January’s report followed a familiar pattern: All of the growth was in the private sector. Government employment actually fell by 10,000 jobs. The headline unemployment rate ticked up slightly to 5.7 percent. 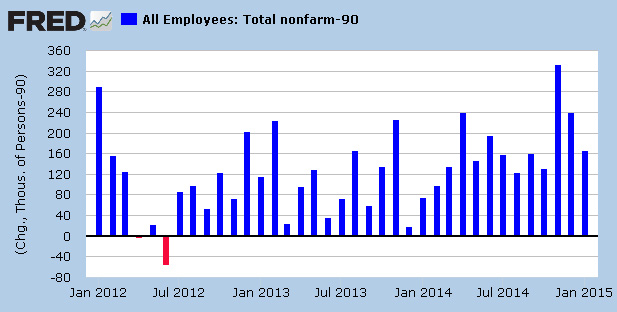 Perhaps the best news, however, came in the wage data. Hourly wages of production and nonsupervisory employees—my preferred indicator of wage growth—went up 0.4 percent. However, inflation was negative in December, so this represents a pretty sizeable gain in real terms. (Though note that it might be ephemeral since December’s negative inflation rate was due mostly to plummeting oil prices, which is a short-term effect.) Over the past year, hourly wages have increased 2 percent, which is up a bit even when you adjust for inflation. It’s still nothing to shout about, but it’s at least a glimmer of real wage growth.

Overall: not bad. This is still not a roaring recovery, but the data is very steadily showing genuine sustained growth. Austerity policies have delayed this turnaround by upwards of a year or two, but at least it’s finally here. After years of sluggishness, the economy is finally doing pretty well.

NOTE: January is the month when the BLS does its big annual readjustment of jobs data for the entire year. However, the overall change turned out to be quite small, so it doesn’t really affect any of the numbers above.