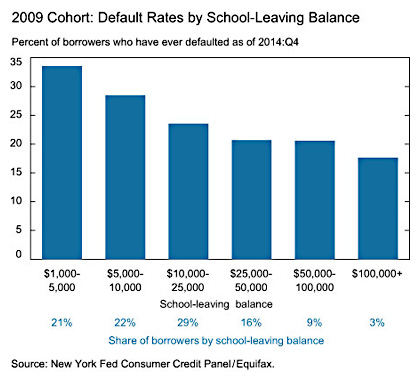 Alex Tabarrok passes along the chart on the right, which shows the default rate on student loans. What it shows is surprising at first glance: the highest default rates are among students with the lowest debt, not the highest.

But on second glance, this isn’t surprising at all. I’d suggest several good reasons to expect exactly this result:

A commenter suggests yet another reason for high default levels at low levels of debt: it’s an artifact of “students” who are already deep in debt and are just looking for a way out: “The word is out if you have bad credit and are desperate for funds just go to a community college where tuition is low and borrow the maximum….Want the defaults to go down — stop lending to students that have a significant number of remedial courses their 1st and 2nd terms at a college where tuition is already low.”

If you’re likely to complete college, student loans are a good investment. But if you’re right on the cusp, you should think twice. There’s a good chance you’ll just end up dropping out and you’ll end up with a pile of student loans to pay back. If you’re in that position, think hard about attending a community college and keeping student loans to the minimum you can manage.

And try majoring in some field related to health care. Occupations in health care appear to have a pretty bright future.