Erik Eckholm of the New York Times writes that violent crime has plunged dramatically over the past two decades. But the reasons remain elusive:

There are some areas of consensus. The closing of open-air drug markets….revolution in urban policing….increases in drug and gun sentences….Various experts have also linked the fall in violence to the aging of the population, low inflation rates and even the decline in early-childhood lead exposure. But in the end, none of these factors fully explain a drop that occurred, in tandem, in much of the world.

“Canada, with practically none of the policy changes we point to here, had a comparable decline in crime over the same period,” said Franklin E. Zimring, a law professor and an expert in criminal justice at the University of California, Berkeley. He described the quest for an explanation as “criminological astrology.”

I’m happy to see lead at least get a shout out. Unless I’ve missed something, this might actually be the first time the New York Times has ever mentioned childhood lead 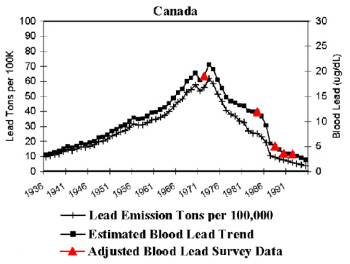 exposure as a possible explanation for the decline in violent crime. Progress!

But while Eckholm is right to say that none of the other factors he mentions can explain a decline in violent crime that happened all over the world, he’s wrong to include lead in that list. It’s the one explanation that does have the potential to explain a worldwide drop in crime levels. In particular, the chart on the right shows the use of gasoline lead in Canada, which peaked in the mid-70s and then began dropping as catalytic converters became more common. Leaded gasoline was banned for good in 1990, and is now virtually gone with a few minor exceptions for specialized vehicles.

So what happened? As Zimring says, Canada saw a substantial decrease in violent crime that started about 20 years after lead emissions began to drop, which is exactly what you’d expect. I calculated the numbers for Canada’s biggest cities back when I was researching my lead-crime piece, and crime was down from its peak values everywhere: 31 percent in Montreal, 36 percent in Edmonton, 40 percent in Toronto and Vancouver, and 53 percent in Ottawa. CompStat and broken windows and American drug laws can’t explain that.

“Criminological astrology” is a good phrase to describe the relentless effort of US criminologists to explain a worldwide phenomenon using only parochial US data. But there is one explanation that really does work pretty well everywhere: the reduction in gasoline lead, which happened all over the world, but happened at different times in different places. And everywhere it happened, crime started to decline about 20 years later. No explanation is ever perfect, but this one comes closer than most.