When the 35-year-old Cloverleaf Mall in Chesterfield, Virginia, closed in 2007, the Chesterfield Observer noted that while it had been a popular hangout for families in the 1970s and ’80s, “That all changed in the 1990s. Cloverleaf’s best customers, women, began staying away from the mall, fearful of the youth who were beginning to congregate there. People [said a former Cloverleaf manager] started seeing kids with huge baggy pants and chains hanging off their belts, and 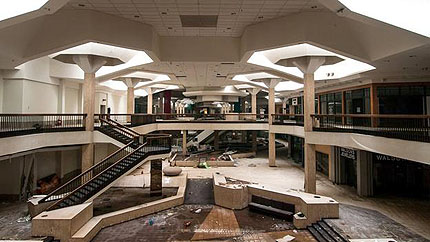 people were intimidated, and they would say there were gangs.”

OK.  How about Amy Merrick in the New Yorker earlier this year? What does she think?

As any cubicle dweller knows, people like natural light and fresh air and, when deprived of them, feel oppressed. So are people alienated by those older malls, with their raw concrete, brutalist architecture and fretful, defensive air? Developers have a shorthand for this style: the “classic graybox.” In his talk, [Rick] Caruso flashed grim photos of their façades. He lingered on a picture of a deserted food court; you could practically smell the stale grease. “Does this look like the future to you?” he asked.

There is a generational story behind what’s happening to shopping malls. And if you want to know how it will end, you have to pay attention to each generation’s role….What most impressed the G.I.s (and the Silent Generation who succeeded them) about malls was their enormous efficiency….Then came suburban Boomers, who grew up with these newly minted malls as kids. As they matured, many Boomers soured on what they regarded as the soulless and artificial consumerism of malls and began to champion what business author Joseph Pine calls the “experience economy” — turning stores and restaurants from mere retail outlets into places that mean something (think Rainforest Cafe or Build-a-Bear Workshop or L.L. Bean). That thinking not only inspired more stores to include a “tourism” component, but it also drove the surging popularity of lifestyle centers in the early 1990s.

….But Xers soon changed the mall scene. This strapped-for-cash generation helped popularize “category killers” and was the first to adopt online shopping. Millennial teens who arrived in the late 1990s began to show less interest in malls in part because their parents deemed malls too dangerous.

The lack of reasonable explanations suggests that nobody really knows the answer. It certainly remains a mystery to me. There’s no question that shopping spaces of all kinds have been hurt in recent years by the rise of online retail, and that mall development in particular was hurt by the Great Recession. But the switch away from enclosed malls began in the 90s, and it wasn’t because people were tired of shopping. Nor was it because suburbs started to die. It was because enclosed malls were replaced by outdoor “power centers” and “lifestyle centers.”

And how does this play out in less temperate climes than Southern California? No new enclosed mall has been built near me since (I think) 1987. That’s not too big a deal, since even in winter it’s no chore to shop at an outdoor shopping center. But what about in the suburbs of Chicago? Or Detroit? Or Kansas City? Do people really want to shop at outdoor lifestyle malls when it’s ten below zero? Do enclosed malls make a sudden comeback when the weather is bone-chillingly cold and then die again in the spring? Or what?

Perhaps this is just one of those mysteries: consumer tastes changed in the early 90s, and they changed because that’s what consumer tastes do. Radio Shack used to be pretty popular too.

Still, it’s an interesting mystery. I wish there were a good explanation, not just a few obvious guesses that amount to little more than a shrug of the shoulders. Why did enclosed malls die? Somebody needs to come up with a definitive answer.

POSTSCRIPT: One thing I should note is that although few (no?) new enclosed malls are being built, older malls that have been shut down don’t all turn into the infamous dead malls that have gotten so much attention lately. A fair number of them are renovated and reopened. I’m not sure what, if anything, that means. Just thought I’d mention it.