Bloomberg provides us today with the following chart of oil prices over the years: 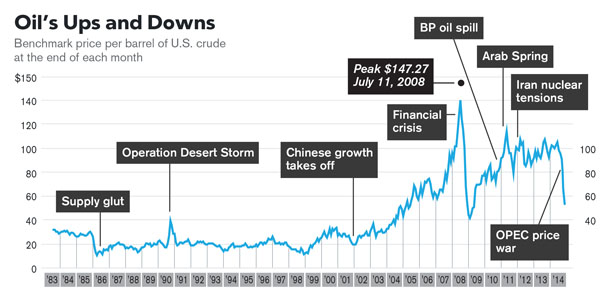 James Pethokoukis has a complaint:

There is one major factor affecting oil prices that somehow got left out. Really, nothing on fracking and the shale oil revolution? Granted, it’s not an event easy to exactly date (though somehow the accompanying article manages the trick), but neither is China’s economic takeoff, and that got a shout-out.

It’s a fair point—but only up to a point. Keep in mind that US shale oil production has been growing steadily for the past five years, and during most of that time oil prices have been going up. It’s only in the past six months that oil prices have collapsed. Obviously there’s more going on than just shale.

James Hamilton, who knows as much about the energy market as anyone, figures that about 40 percent of the recent oil crash is due to reduced demand—probably as a result of global economic weakness. Of the remainder, a good guess is that half is due to shale oil and half is due to the OPEC price war in Bloomberg’s chart.

In other words, although US shale oil production is likely to have a moderate long-term impact, it’s probably responsible for a little less than a third of the current slump in oil prices. The rest is up to OPEC and a weak economy. So give shale its due, but don’t overhype it. It’s still responsible for only about 5 percent of global production.