Michael Gerson thinks that Democrats have regressed to the bad old days of 70s liberal excess, when the American public rebelled against lefty craziness and finally installed Ronald Reagan as president to get the country back on track. Bill Clinton and the New Democrats eventually got their party back in power by moving toward the center, but over the past six years that’s all been thrown overboard. “President Obama has now effectively undone everything that Clinton and the New Democrats did in the 1980s and ’90s,” he warns.

Ed Kilgore, who was there, throws up his hands in irritation:

Since Gerson appears to assume that Clinton was strictly about appropriating conservative themes, I guess he cannot come to grips with the fact that the Affordable Care Act was based on the “managed competition” model that a lot of New Democrats preferred to Clinton’s own health care proposal, or that Obama’s “cap-and-trade” proposal was relentlessly and redundantly promoted by the New Democratic think tank the Progressive Policy Institute. Just about everything Obama has proposed on tax policy, education policy, infrastructure policy, trade policy and even national security policy has been right out of the Clintonian playbook. Has Gerson noticed that 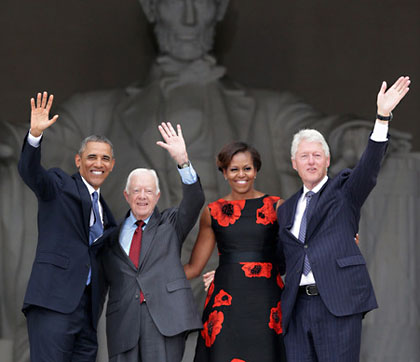 Obama’s not real popular with people on the left wing of the Democratic Party?

There’s a weirdly schizoid nature to Obama’s presidency. If you were to call him the most liberal president since LBJ, you’d be right. There’s really not much question about it.

But that’s not because he’s some kind of wild-eyed lefty. It’s because there have only been two other Democratic presidents in the meantime, and both of them were relatively conservative. It’s easy to forget now, but Jimmy Carter’s strength in the 1976 Democratic primaries was largely based on his appeal to evangelical Christians. This spawned the ABC movement—Anybody But Carter—midway through the primaries, but it was motivated not by Carter’s liberalism, but specifically by a fear among liberal Democrats that Carter was too conservative for the party. And he was. In office, Carter governed mostly from the center left, infamously opening himself up to a crippling primary challenge in 1980 from Ted Kennedy.

Ditto for Bill Clinton, who explicitly ran and governed as a centrist liberal. So is it fair to say that Obama is the most liberal president of the past half century? Sure, in the same way that it’s fair to say that a Honda Civic is faster than a Toyota Corolla or a Chevy Cruze. But that hardly makes the Civic a speed demon.

Still, even with all that said, Obama is, in fact, more liberal than previous Democratic presidents of the past half century. He’s rhetorically more liberal than Clinton, for example, and he’s rarely felt the need to do any Sister Souljah-ing. What’s more, while he may have made occasional noises about entitlements and budget deficits, he’s got nothing like either welfare reform or bank deregulation on his record. Everything he’s done has been pretty much in the mainstream liberal tradition.

Plus there’s one more thing: Obama has been far more effective than either Carter or Clinton. That obviously makes him seem more effectively liberal than his predecessors. But this isn’t really due to either a fervent commitment to radical populism or to shrewd management of the lefty agenda. It’s because Obama enjoyed a huge Democratic majority in Congress for his first two years. When that went away in 2010, so did much of his success.

So two things are true: Obama is the most liberal president since LBJ and he’s also a fairly standard-issue mainstream Democrat. Obamacare, in particular, doesn’t make him a radical. It just makes him lucky to have had a Congress willing to pass it.

After 30 years of ascendant Reaganism, it’s probably normal for conservatives to feel that any kind of liberal agenda is extremist almost by definition. But that’s little more than an unwillingness to accept the normal pendulum swings of American politics. As Kilgore points out, Obama’s tax policy, education policy, infrastructure policy, trade policy and national security policy have been to the left of George Bush, but not really much different from anything Bill Clinton would have done if he’d been able to. In the end, Obama is a Honda Civic to Clinton’s Toyota Corolla. A little faster, but still not exactly a thunderbolt.