The LA Times reports that murder is becoming less common among teenagers:

“You’re not seeing youngsters like you have in the past,” said Det. Todd Anderson of the Los Angeles County Sheriff’s Department. “You used to see a lot more kids who were 16, 17, 18, 19. While it does still 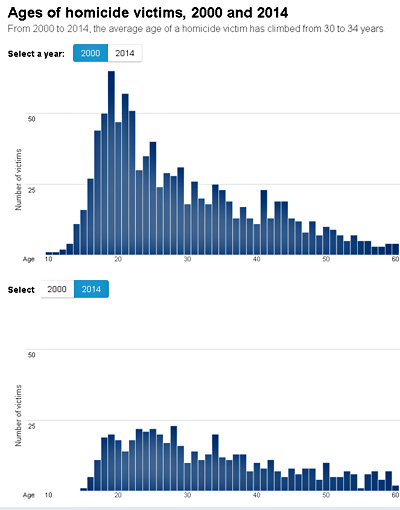 happen, it seems like they are getting a little bit older.”

George Tita, a criminologist at UC Irvine who studies homicide, said the increase in age is consistent with the changing nature of gang violence and the sharp decrease in killings throughout the county.

Others say that the trauma of losing brothers, cousins and fathers to street violence may make gang life less appealing to younger people. “It’s the little brother looking at what happened to the big brother and saying, ‘I don’t want to go that way,’” said Elliott Currie, another UC Irvine criminologist. “It’s something I think we criminologists don’t talk about enough.”

That may be part of the answer. But you’ll be unsurprised that there might be another, more plausible, reason: lead. Back in the 90s, the teenage and 20-something generations had grown up in the 70s and early 80s. This was an era of high lead emissions, and this lead poisoning affected their brains, causing them to become more violence-prone when they grew up.

Today’s teenagers, however, were born in the late 90s and early aughts. This was the era when leaded gasoline had finally been completely banned, so they grew up in a low-lead environment. As a result, they’re less violence prone than their older siblings and less likely to find refuge in gangs.

As always, lead is not the whole story. There have been other changes over the past couple of decades, and those changes may well have had an impact on both gangs and on crime more generally. But lead clearly has a generational impact. Younger kids are now less violent than in the past, while older folks haven’t changed much. They’ve gotten older, which has always been associated with a drop in violent crime, but their basic temperament is still scarred by a childhood filled with lead emissions from automobiles.

In any case, the age of a homicide victim is highly correlated with the age of the killer, and the chart above, excerpted from the Times story, shows homicide victimization age in 2000 and 2014. The huge bulge between age 15-30 is nearly gone, which is just what you’d expect if lead played an important role in violent crime. There may be less mystery here than the experts think.