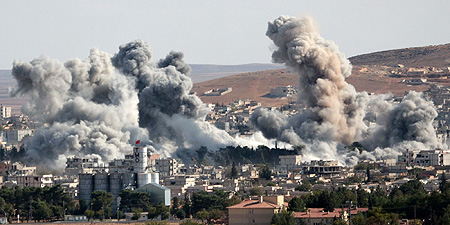 Kurdish fighters in the Syrian border town of Kobani appeared poised Monday to deal a decisive defeat to Islamic State militants after months of street clashes and U.S. aerial bombardment, signaling a major setback for the extremist group.

….The apparent breakthrough shows how U.S. air power, combined with a determined allied force on the ground, can successfully confront Islamic State. The military watched with surprise as Islamic State continued sending hundreds of fighters, vehicles and weapons to Kobani, which was of no critical strategic importance to the overall fight but had become something of a public relations fight.

“Essentially, they said, ‘This is where we are going to make a stand’ and flooded the region with fighters,” said Col. Edward Sholtis, a spokesman for U.S. Air Force Central Command, in charge of air operations in the battle against the Islamic State.

My expert in all things Kurdish emailed me this comment today: “This is a big deal, and it proves the viability of Obama’s strategy of working with proxies in Iraq and Syria to defeat ISIS. My prediction is we won’t hear much boasting about it from Obama though. These aren’t the politically chosen proxies.”

I’ve been one of the skeptics of Obama’s strategy, and I’ll remain so until the Iraqi military demonstrates the same fighting ability as the Kurdish peshmerga. Kobani, after all, is more a symbolic victory than anything else, and ISIS continues to control large swathes of Iraq. Nonetheless, at a minimum this shows that ISIS is hardly unbeatable, something that Iraqi forces probably needed to see.

Bottom line: this is a proof of concept. When we can do the same thing in Mosul with Iraqi forces in the lead, then I’ll be a real believer.