A couple of weeks ago, National Review’s Jay Nordlinger suggested that maybe President Obama’s next executive action would be normalization of relations with Cuba. That struck me as something out of left field, since I’d heard not even a hint of a 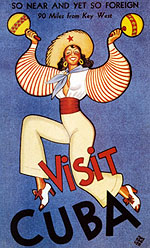 peep of a rumor that anything along these lines was in the works. But congratulations Jay! You were right:

The United States will restore full diplomatic relations with Cuba and open an embassy in Havana for the first time in more than a half century after the release of an American contractor held in prison for five years, American officials said Wednesday.

In a deal negotiated during 18 months of secret talks hosted largely by Canada and encouraged by Pope Francis who hosted a final culminating meeting at the Vatican, President Obama and President Raul Castro of Cuba agreed in a telephone call to put aside decades of hostility to find a new relationship between the island nation just 90 minutes off the American coast.

….The United States will ease restrictions on remittances, travel and banking relations and Cuba will release 53 Cuban prisoners identified as political prisoners by the United States government. Although the decades-old American embargo on Cuba will remain in place for now, the administration signaled that it would welcome a move by Congress to ease or lift it should lawmakers choose to.

Oddly enough, I don’t see any reaction yet from Nordlinger, or indeed, from anyone over at National Review. Perhaps the intercession of Pope Francis is giving them pause?

In any case, this is good news. I don’t personally care an awful lot about Cuba or our relations with them, but half a century of pointless enmity really ought to be enough. Fidel Castro may not have been an admirable guy, but Fulgencio Batista was no great shakes either, and it’s long past time to stop pining away for the days when he was in power. So let it go, folks. We don’t have to approve of everything Cuba does in order to act like adults and conduct normal relations on both sides. We manage to do it with Russia and Venezuela and Pakistan, after all.

In any case, that’s that. The next step is lifting the trade embargo, but I suppose it’s unlikely that a Republican Congress is going to act on that any time soon. Too bad. There’s no longer any reason for it, and I’ll bet the majority of cigar smokers are Republicans. They want their Havanas, so lifting the embargo would, in a sense, be nothing more than a routine bit of base maintenance. Perhaps if Republicans think of it as just another political payoff for their strongest supporters, they can be talked into it.