If you have a good memory, you’ll remember that I’ve written before that the shale oil revolution might be a bit less revolutionary than we think. The reason is that shale oil wells decline really fast, which means that total production could top out at little more than 3-4 million barrels per day and start declining as soon as 2020. Only time will tell.

Today brings similar news: the shale gas revolution might also be a bit less revolutionary than we think. A team at the University of Texas has spent the past three years in a minute examination of the four biggest shale gas plays in the US, and they’ve concluded that these fields probably contain less gas than previous estimates from the Energy Information Administration. Mason Inman explains in the current issue of Nature:

The main difference between the Texas and EIA forecasts may come down to how fine-grained each assessment is. The EIA breaks up each shale play by county, calculating an average well productivity for that area….The Texas team, by contrast, splits each play into blocks of one square mile (2.6 square kilometres) — a resolution at least 20 times finer than the EIA’s.

Resolution matters because each play has sweet spots that yield a lot of gas, and large areas where wells are less productive. Companies try to target the sweet spots first, so wells drilled in the future may be less productive than current ones….The high resolution of the Texas studies allows their model to distinguish the sweet spots from the marginal areas. As a result, says study co-leader Scott Tinker, a geoscientist at the University of Texas 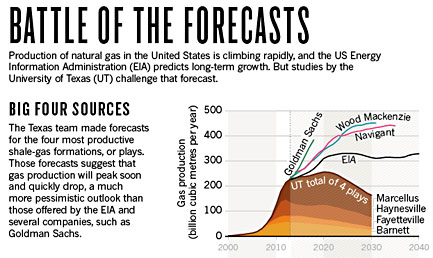 at Austin, “we’ve been able to say, better than in the past, what a future well would look like”.

So what does this mean? The chart on the right tells the story. If the EIA is right, shale gas production in the Big Four fields will continue rising through 2025 before plateauing at around 300 billion cubic meters. But if the Texas team is right, production will peak in 2020 at around 250 bcm and then start declining rapidly.

Obviously we don’t know if the Texas team’s methodology is more accurate than the EIA’s. As they say, more research is needed. For the moment, though, it’s worth keeping an even keel about both shale oil and shale gas. It’s possible that we’ve become a little too giddy about both.