Merry Christmas! The American economy added 321,000 new jobs last month, 90,000 of which were needed to keep up with population growth. This means that net job growth clocked in at 231,000 jobs, which is….pretty good, actually. And virtually all of it came from private sector job growth. We’re still not in full-tilt recovery mode, but this is a genuinely positive number. The unemployment rate stayed steady at 5.8 percent.

And there are no hidden gotchas in these results. The unemployment rate didn’t stay steady just because folks were dropping out of the labor force. All the employment-related numbers changed by similar amounts last month, and the labor force participation rate remained unchanged at 62.8 percent. If you insist on finding a downside to this month’s jobs report, perhaps it’s the fact that the unemployment rate spiked up a bit for workers with no high school diploma. But that’s as likely to be a statistical blip as anything else.

Hourly earnings for all workers rose at an annualized rate of about 4.3 percent, which isn’t bad, but earnings for nonsupervisory workers were up only 2.3 percent, which is roughly flat when you adjust for inflation. I generally pay more attention to the latter number, which means that wages still aren’t showing much energy. This is, as usual, unsettling. It suggests that even with the economy adding jobs, there’s still a fair amount of slack in the labor market.

Still, that’s a lagging indicator. If we can manage to keep up this level of job growth over the next year, wages will probably start to show some life. Needless to say, though, that’s a big if. The world economy is sailing into headwinds at the moment, and there’s no telling if the United States can buck the trend. Perhaps falling oil prices will give us the added push we need. Perhaps. 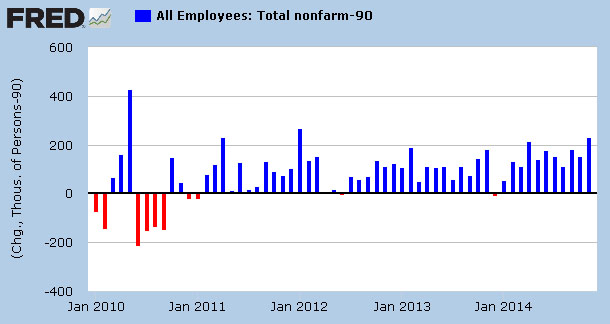