Things are a bit slow this morning, so I want to replay for you a Twitter conversation with CNN’s Jake Tapper. The subject is Jonathan Karl of ABC News, who harassed 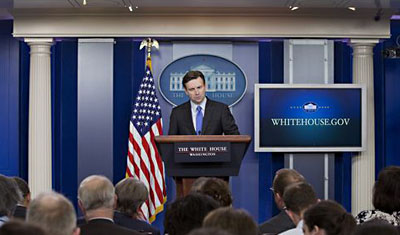 press secretary Josh Earnest earlier this week over President Obama’s picks as ambassadors to Argentina and Hungary. Neither one has any special diplomatic experience, and one of them is a former producer for a soap opera:

Jake Tapper: meant to give props to @jonkarl for his Bold and Beautiful ambassador questions to @PressSec the other day

Kevin Drum: Why? Is anything really gained by this daily kabuki in the press room?

JT: why what? why is it worth challenging people in power about questionable decisions?

JT: i guess i dont think trying to hold those in power accountable is a “waste of time.” have a great day

Tapper’s point is pretty easy to understand, and my colleague Nick Baumann agrees with him. There’s a long tradition of rewarding big campaign contributors with cushy ambassadorial posts in spite their fairly visible lack of qualification. There’s not much excuse for this, so why not demand to know why Obama is doing it?

But here’s my point. This is yet another example of a bad habit that the White House press corps engages in constantly: faux confrontation over trivia that gets them camera time and kudos from late-night comedians, but is, in reality, completely pointless. Jonathan Karl knows perfectly well why these two folks were appointed. They raised lots of money for Obama. Josh Earnest knows it too. This stuff has been going on forever. But Karl knows something else: Earnest is a spokesman. He’s flatly not allowed to fess up to political stuff like this, and he’s just going to dance around it.

This is why I called it kabuki. If this were actually an important topic where there was some uncertainty about the answer, then confrontation would be great. I’d like to see more of it for truly important stuff. But is Karl’s investigative reputation really enhanced by an inane kindergarten round of “let’s pretend” with whatever poor schmoe happens to be at the press room podium? Is this truly an example of “holding those in power accountable”?

I really don’t see it. Then again, maybe Karl is working on a whole segment about the ridiculous practice of rewarding supporters with cushy diplomatic posts in fashionable countries. Or maybe even a segment asking why countries even bother having ambassadors in high-profile capitals where they serve precious little purpose anymore. If that’s the case, then maybe the questions made sense.

But purely as confrontation? Please. Dignifying this silliness as “challenging people in power” is like calling a mud fort an infrastructure project. It really doesn’t deserve any props.

UPDATE: Hmmm. Apparently Tapper and some others interpreted my initial tweet as referring to the entire concept of the press briefing. So to some extent, this is a misunderstanding. Obviously I don’t object to the general practice of holding briefings (though I wish reporters would boycott all the “background” briefings). I just object to the habit of peppering White House flacks with questions about trivial topics that everyone knows the answer to. It seems more designed to get YouTube kudos than to truly challenge anyone in power.