The “Broken Windows” theory suggests that tolerance of small acts of disorder creates an environment that leads to rising amounts of serious crime. So if police crack down on small offenses—petty vandalism, public lewdness, etc.—crime reductions will follow. George Kelling was one of the originators of the theory, and NYPD police commissioner Bill Bratton is one of its strongest proponents. Here’s what they write about it:

New York City’s experience has suggestively demonstrated the success of Broken Windows over the last 20 years. In 1993, the city’s murder rate was 26.5 per 100,000 people….While the national murder rate per 100,000 people has been cut in half since 1994, the rate in New York has declined by more than six times.

….Broken Windows–style policing was pivotal in achieving these results. Left unchecked, street corners can degenerate into criminogenic environments. The bullies take over. They drink alcohol and take drugs openly, make excessive noise, intimidate and shake down honest citizens….By cracking down on low-level offenders, the police not only made neighborhoods more orderly….In the next four years, annual shootings fell by nearly 3,300 incidents—or about two fewer shootings per day.

….Current crime levels don’t stay down by themselves because of some vaguely defined demographic or economic factor. Crime is actively managed in New York City every day.

So here’s the thing: this is almost certainly wrong. Not even controversial. Just wrong: broken windows policing may well have been helpful in reducing New York’s crime rate, but there’s flatly no evidence that it’s been pivotal. It’s true that crime in New York is down more than it is nationally, but that’s just because crime went up more in big cities vs. small cities during the crime wave of the 60s 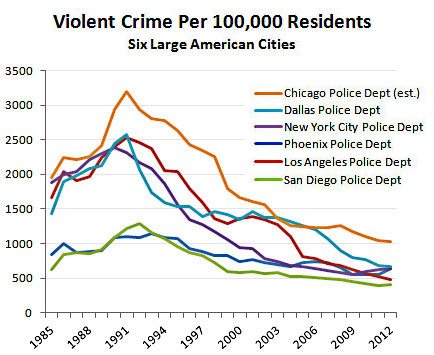 through the 80s, and it then went down more during the crime decline of the 90s and aughts. Kelling and Bratton can dismiss this as ivory tower nonsense, but they should know better. The statistics are plain enough, after all.

Take a look at the two charts on the right. The top one shows crime declines in six of America’s biggest cities. As you can see, New York did well, but it did no better than Chicago or Dallas or Los Angeles, none of which implemented broken windows during the 90s. The bottom chart is a summary of the crime decline in big cities vs. 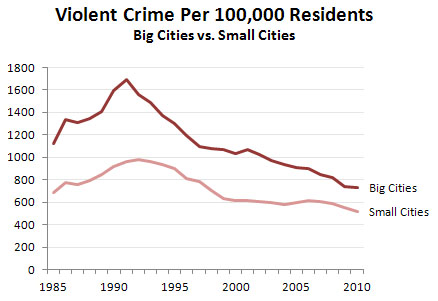 small cities. Again, the trend is clear: crime went up more during the 80s in big cities, but then declined more during the 90s and aughts. The fact that New York beat the national average is a matter of its size, not broken windows.

Now, none of this is evidence that broken windows doesn’t work. The evidence is foggy either way, and we simply don’t know. My own personal view is that it’s probably a net positive, but a fairly modest one.

But this gets us to the core of the issue. Kelling and Bratton write that the “academics who attribute crime drops to economic or demographic factors often work with macro data sets and draw unsubstantiated, far-fetched conclusions about street-level police work, which most have scarcely witnessed.” Why such contempt? Because Kelling, and especially Bratton, want to believe that the things they do affect crime. After all, if crime has declined because of demographics or gasoline lead or the end of the crack epidemic, then all of Bratton’s work—along with that of the cops he manages—is pretty much useless. He’s just been spinning his wheels while huge, impersonal forces have been acting invisibly.

Nobody wants to believe that. What’s more, we don’t want people to believe that. Police officers, like all of us, work better if they think that they’re having an impact. And their bosses, if they want to keep their trust, had damn well better insist that this is the case. When Bratton says that broken windows works, he’s not just saying it because he believes it. He’s saying it because he has to. If he doesn’t, he’d lose the trust of his officers.

Still, the truth is almost certainly more complicated than Bratton says. Crime is down for multiple reasons, and if I had to guess I’d say about 70 percent is due to big, impersonal forces and 30 percent is due to changes in policing, including broken windows. That may not be a very satisfying explanation, but it’s most likely the true one.

POSTSCRIPT: By the way, did you know that the link between gasoline lead and crime was the “trendiest crime decline hypothesis in 2014”? I didn’t. But that’s kind of cool. You can, of course, read more about that here.