Just a quick note about an election meme that’s already driving me crazy: Democrats lost because they’re timid, vacillating milksops who can barely string together a coherent message and are congenitally unwilling to stand up 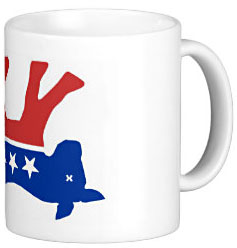 for their own beliefs. No wonder everyone hates them!

Give me a break. Democrats are Democrats, and they act pretty much the same every election cycle. And yet, they won big in 2006, 2008, and 2012. If they’re such gutless milksops, how were those victories possible?

Look: every election cycle features different candidates. Obviously it’s possible that, on average, this year’s crop of Democrats were more milksoppy than usual. But here’s what’s far more likely: 2014 featured a fairly ordinary bunch of candidates, and the party’s leadership was roughly as effective and visionary (or not) as it normally is. Ditto for fundraising and GOTV efforts.

But every election cycle has structural differences. This one featured a bad Senate map for Dems. It was a midterm election. The party leader was a president whose popularity has waned. The economy continues to be listless. Washington is paralyzed by gridlock, which means that Democrats didn’t have many legislative successes to sell. And anyway, a consistent message would have been all but impossible given all the seats they had to defend in conservative states.

Maybe Dems could have done better. Maybe their message this year really was weak and stale. But if your theory of defeat is based on some enduring and egregious flaw that’s inherent in the Democratic Party, you should reconsider. It probably doesn’t explain as much as you think. Structural explanations that take account of varying conditions are almost always better.