I wonder also if our digital life hasn’t made all this far worse. When you sit in a room with a laptop and write about other people and their flaws, and you don’t have to look them in the eyes, you lose all incentive for manners.

You want to make a point. You may be full to the brim with righteous indignation or shock or anger. It is only human nature to flame at abstractions, just as the awkwardness of physical interaction is one of the few things constraining our rhetorical excess. When you combine this easy anonymity with the 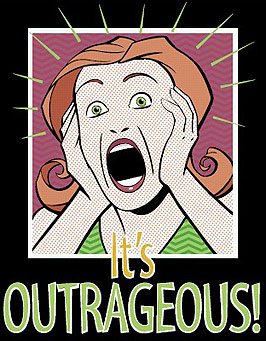 mass impulses of a Twitterstorm, and you can see why manners have evaporated and civil conversations turned into culture war.

I’m as guilty of this as many….

Why yes! Yes you are, Andrew.

On a more serious note, I actually disagree with his diagnosis of the problem, which has become so common as to be nearly conventional wisdom these days. Here’s why: I have not, personally, ever noticed that human beings tend to rein in their worst impulses when they’re face to face with other human beings. Sometimes they do, sometimes they don’t. Most often, they don’t. Arguments with real people end up with red faces and lots of shouting constantly. I just flatly don’t believe that the real problem with internet discourse is the fact that you’re not usually directly addressing the object of your scorn.1

So what is the problem? I think it’s mostly one of visibility. In the past, the kinds of lapses that provoke internet pile-ons mostly stayed local. There just wasn’t a mechanism for the wider world to find out about them, so most of us never even heard about them. It became a big deal within the confines of a town or a university campus or whatnot, but that was it.

Occasionally, these things broke out, and the wider world did find out about them. But even then, there was a limit to how the world could respond. You could organize a protest, but that’s a lot of work. You could go to a city council meeting and complain. You could write a letter to the editor. But given the limitations of technology, it was fairly rare for something to break out and become a true feeding frenzy.

Needless to say, that’s no longer the case. In fact, we have just the opposite problem: things can become feeding frenzies even if no one really wants them to be. That’s because they can go viral with no central organization at all. Each individual who tweets or blogs or Facebooks their outrage thinks of this as a purely personal response. Just a quick way to kill a few idle minutes. But put them all together, and you have tens of thousands of people simultaneously responding in a way that seems like a huge pile-on. And that in turn triggers the more mainstream media to cover these things as if they were genuinely big deals.

The funny thing is that in a lot of cases, they aren’t. If, say, 10,000 people are outraged over Shirtgate, that’s nothing. Seriously. Given the ubiquity of modern social media, 10,000 people getting mad about something is actually a sign that almost nobody cares.

The problem is that our lizard brains haven’t caught up to this. We still think that 10,000 outraged people is a lot, and 30 or 40 years ago it would have been. What’s more, it almost certainly would have represented a far greater number of people who actually cared. Today, though, it’s so easy to express outrage that 10,000 people is a pretty small number—and most likely represents nearly everyone who actually gives a damn.

We need to recalibrate our cultural baselines for the social media era. People can respond so quickly and easily to minor events that the resulting feeding frenzies can seem far more important than anyone ever intended them to be. A snarky/nasty tweet, after all, is the work of a few seconds. A few thousand of them represent a grand total of a few hours of work. The end result may seem like an unbelievable avalanche of contempt and derision to the target of the attack, but in real terms, it represents virtually nothing.

The culture wars are not nastier because people on the internet don’t have to face their adversaries. They’re nastier because even minor blowups seem huge. But that’s just Econ 101. When the cost of expressing outrage goes down, the amount of outrage expressed goes up. That doesn’t mean there’s more outrage. It just means outrage is a lot more visible than it used to be.

1I’ll concede that this is potentially a problem with a very specific subset of professional troll. Even there, however, I’d note that the real world has plenty of rough equivalents, from Code Pink to the Westboro Baptist Church lunatics.