I’m late to this story, but last night I finally got around to reading the big campaign tick-tock in the Washington Post by Philip Rucker and Robert Costa. The part everyone is talking about is the description of bad blood between President Obama and Senate Democrats, and Exhibit A comes via a series of stunningly bitter comments from David Krone, Harry Reid’s chief of staff. Here’s how the reporters managed to put the screws to Krone to get him to talk:

This past Sunday, two days before Election Day, Krone sat at a mahogany conference table in the majority leader’s stately suite just off the Senate floor and shared with Washington Post reporters his notes of White House 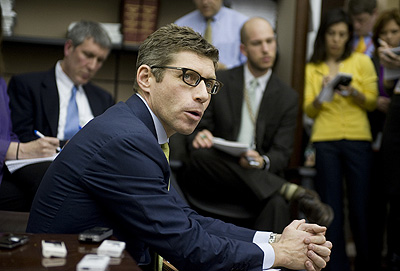 meetings. Reid’s top aide wanted to show just how difficult he thought it had been to work with the White House.

Look: I get that Obama doesn’t socialize much with congressional Democrats. Even as someone who’s long thought that senators need to get over themselves, there’s no question that this is a real failing of Obama’s. Schmoozing and scheming are part of the president’s job, and if you don’t do it you’re going to end up with a lot of offended allies.

That said, take a look at that highlighted sentence. Apparently David Krone is such an unbelievable asshole that he actively decided to vent all his bitterness and bile to a couple of reporters solely to demonstrate just how hard poor David Krone’s job had been during this election season. He even made sure to bring along his notes to make sure he didn’t forget any of his grievances. As an example of preemptive CYA, this is unequaled in recent memory. To hear him tell the story, Dems would have swept to victory if only Obama had been less of a skinflint and given David Krone more money.

You betcha. Please raise your hand if you think lack of money was even on the top ten list of reasons that Democrats lost this year. Anyone? No?

Then there’s this bit of whinging, which I’ve heard over and over:

Exacerbating matters was Obama’s Oct. 2 speech in Chicago, in which he handed every Republican admaker fresh material that fit perfectly with their message: “I am not on the ballot this fall. . . . But make no mistake — these policies are on the ballot, every single one of them.”

“It took about 12 seconds for every reporter, every race, half of the Obama world to say that was probably not the right thing to say,” said a senior Democratic official. It was so problematic that many Democrats wondered whether Obama meant to say it. He did. “It is amazing that it was in the speech,” the official said. “It wasn’t ad-libbed.”

Good God. Are Democrats really delusional enough to convince themselves that this made even the slightest difference? Aside from the fact that virtually no one outside the political junkie community heard this speech, who cares anyway? Republicans had long since made the election all about Obama and his policies, and it didn’t matter a whit whether Obama acknowledged this or not. The GOP attack ads were going to be the same either way. If anything, the truth is that Dems might have been better off if they’d been more willing to face the reality Obama tried to warn them about: that this election was about Obama’s policies whether anyone liked it or not. Instead of cowering in their corners, they needed to figure out a way to deal with this.

Obama has made plenty of mistakes over the past year. The healthcare.gov rollout was obviously a debacle that hurt Democrats. Foreign policy has been occasionally tone deaf, even if it’s been substantively fairly solid. The flip-flop on immigration was inept. But Obama has raised plenty of money. He’s been willing to either campaign or keep his distance as circumstances dictate. His relatively low approval ratings obviously hurt Democrats, but he was far from their biggest problem. They better face up to that sometime soon.