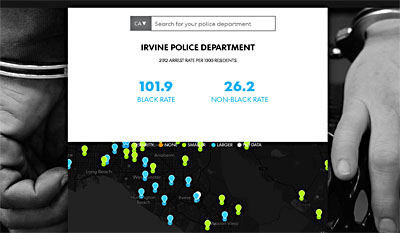 The Ferguson police department famously arrests blacks at a rate three times higher than other races. A USA Today investigation shows just how commonplace that is:

At least 1,581 other police departments across the USA arrest black people at rates even more skewed than in Ferguson, a USA TODAY analysis of arrest records shows. That includes departments in cities as large and diverse as Chicago and San Francisco and in the suburbs that encircle St. Louis, New York and Detroit.

Those disparities are easier to measure than they are to explain. They could be a reflection of biased policing; they could just as easily be a byproduct of the vast economic and educational gaps that persist across much of the USA — factors closely tied to crime rates. In other words, experts said, the fact that such disparities exist does little to explain their causes.

Curious to know how your city fares? Click here and check out various places in your state. My hometown, it turns out, beats out Ferguson easily, arresting blacks at a rate nearly four times higher than other races. The difference, of course, is that Irvine is only 1.7 percent black to begin with, so there’s hardly anyone here to complain about it. That makes it easy to ignore, but that’s about all it means.