I got various kinds of pushback on this, but one particular train of criticism suggested that I was overestimating just how targeted Democratic programs were. Sure, they help the poor, but they also help the working class a fair amount, and sometimes even the lower reaches of the middle class. However, while there’s some truth to this for certain programs (unemployment insurance, SSI disability), the numbers I’ve seen in the past don’t really back this up for most social welfare programs.

Obamacare seems like an exception, since its subsidies quite clearly reach upward to families in the working and middle classes. Today, however, Bill Gardner points me to a Brookings paper from a few months ago that suggests just the 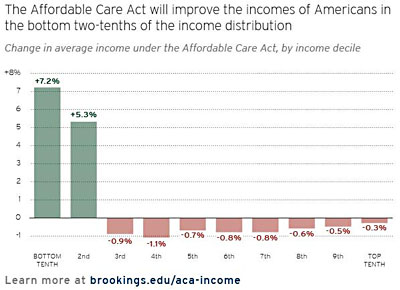 opposite. The authors calculate net gains and losses from Obamacare, and conclude that nearly all its benefits flow to the poor. If I interpolate their chart a bit, winners are those with household incomes below $25,000 or so, and losers are those with incomes above $25,000.

The authors are clear that their estimates are not definitive, thanks to difficulties in performing some of the calculations. And obviously they’re just averages. Quite plainly, there are some families with higher incomes that benefit from Obamacare.

Still, there are fewer than you think—partly because the subsidies decline at higher incomes and partly because people with higher incomes already have employer insurance and don’t need Obamacare. That said, I don’t want to make too much of this single chart, especially given the measurement difficulties it presents. But I do think it’s illustrative. If you think of Obamacare as something that benefits the working and middle classes, you’re probably wrong. It may benefit a few of them, but overall it’s a cost to them—or, under more generous assumptions, perhaps a wash.

Obviously there’s more to this, and Gardner discusses some of the other electoral implications of Obamacare in his post. It’s worth a read. But the bottom line is simple: like most of the social welfare programs championed by Democrats, Obamacare is primarily aimed at the poor. Once again, the working and middle classes are left on the outside looking in.

POSTSCRIPT: I’m sure many people will point out that middle class folks benefit from Obamacare in other ways. If they lose their jobs, for example, they can stay insured even if they have a preexisting condition. That’s a benefit! However, as Gardner points out, an awful lot of middle-class voters don’t know about these kinds of benefits, so it doesn’t register with them. Basically, they take a look at who’s getting the cash, and for the most part, it’s not them.